Cofounders Britt Norton and Christine Horton (right) have taken advantage of an opening in the spinal surgery market.
April 01, 2020 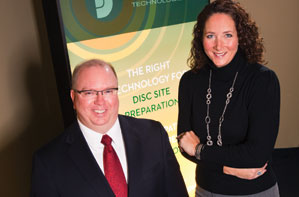 Career-long veterans of the Minnesota medical device industry, Christine Horton and Britt Norton were laid off from RayMedica, a Bloomington-based spinal device manufacturer (now part of New York–based Centinel Spine), in April 2005. “Having spent a lot of time in watching surgeries and understanding the emerging spine market, we looked at the layoffs as an opportunity,” says Horton, who had been the company’s director of marketing.

Recognizing a need in the industry, Horton and Norton took a distinctive approach in founding Minnetonka-based CoreSpine Technologies in June 2005. They didn’t have a technology in mind when they left RayMedica, “so we asked a lot of surgeons what they would like to see,” recalls Norton, who’d served as RayMedica’s vice president of research and development. “It was a development in solving a problem as opposed to starting with a solution and looking for a problem to solve, which is what some companies do. We think we did it the right way.”

The problem the pair solved was creating a device to completely remove the nucleus—the material inside the disc, which provides cushioning between the vertebrae—to make way for a properly positioned implant in the lower back (lumbar) region during a minimally invasive fusion procedure. “The implant enables bone to grow across the disc and get rid of the patient’s back pain,” Norton says. “The challenge is trying to get all that degenerated material out, and there’s a lot of it, through smaller and smaller holes.”

Before moving into their own office space in October 2005, Horton and Norton found a convenient place to set up shop. “Prior to moving into our offices, we had a nice little table at Caribou Coffee in Eden Prairie where many drawings and notes were taken on napkins,” Horton says with a laugh.

The product that the duo launched was based on a less invasive surgical approach. In traditional open spinal surgery, physicians are able to remove 75 to 80 percent of the nucleus using a ronguer, a sharp-edged, stainless steel surgical instrument that was introduced in the U.S. nearly a century ago. In a MISS (minimally invasive spinal surgery) procedure, however, that number drops to less than 50 percent. Nucleus material left in the disc can prevent a complete fusion.

Based on input from physicians, Horton and Norton developed a tissue-selective mechanical device used for nucleus removal and filed their first patent in August 2005. CoreSpine’s flagship product, the Xtend-ST, prepares the spinal disc for minimally invasive fusion devices and other emerging spine technologies. According to CoreSpine, it can potentially remove 90 percent of the nucleus during a MISS procedure.

Assuming that’s the case, using a MISS procedure instead of traditional surgery can result in the same type of success rate for the patient but with far less physical, psychological, and financial pain. “On average, a patient will stay in the hospital about half as long, have a third as many complications, and have a hospital bill of at least $16,000 less than a standard, more invasive procedure,” Norton says.

The Xtend-ST received FDA clearance on May 1, 2009, a happy day at CoreSpine headquarters. “It took 61 days to go through the FDA process,” Norton notes. “We were fairly confident going in because we had such a good regulatory group, [Shakopee-based] Canopy Medical, to help us out. We bought champagne that day to celebrate.”

CoreSpine now is building relationships with large spine companies that are interested in its technology. Additional patents have been applied for in the United States, as well as in Europe, Japan, and China.

“We now have a platform technology and other products in the pipeline,” Horton says. “The Xtend-ST nucleus removal system is the product we saw the most unmet need for in the minimally invasive world of spine surgery, but we certainly have a lot of other ideas that we’ve put engineering time and money into.” In addition, the technology behind the Xtend-ST has been licensed to the ear, nose, and throat field for removing diseased or damaged tissue.

Due to the investment landscape and the economy in general, “we’ve intentionally moved more slowly than we anticipated just to make sure we have a longer runway with our cash,” Horton says. “We remain hopeful that we will see some type of revenue in 2010.”

Horton and Norton want to make sure CoreSpine is positioned for the long haul. “The good news is that the need for our technology has become greater as more companies develop implants that are minimally invasive and as more spine surgeons start to gravitate toward MISS procedures,” Horton says. “The future looks very promising.”