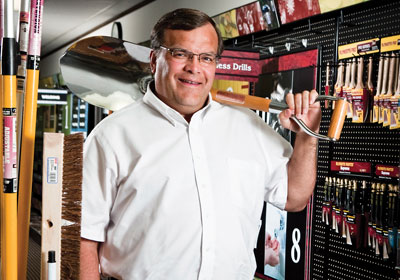 Headquarters: Plymouth (with a distribution center in Milbank, South Dakota)

Solutions: Improve efficiency, reinvest in both its own business and its dealers’ businesses

When your company is a supplier to hundreds of hardware stores, an economic downturn that prompts consumers to spend less is a big concern.

But Steve Draeger and the dealer-owned hardware retailers’ cooperative he oversees also have had to deal with other financial hits. Some are familiar to many businesses: A dollar-a-gallon increase in diesel fuel over the last year adds up fast when your fleet of dedicated delivery trucks accumulates 6 million miles a year on the road. Others are less common but can still hit the bottom line hard—like the federal regulations requiring those truck trailers to be heated in order to keep paints and liquid products from freezing.

“The new regulations are particularly challenging for us given that we operate in the Upper Midwest,” Draeger says. “They’re well-meaning regulations, but I don’t think legislators realized all the ramifications of them when they implemented them.”

But those costs, like those slack sales, can’t be wished away. Draeger and United had to get creative in response. His solution? A double-pronged approach to reinvestment.

On the corporate side, that has meant putting in place new process efficiencies, such as installing a new enterprise resource management system. “We’re moving rapidly toward sharing information via one single database,” Draeger adds. “Currently, we’re still using multiple databases, and that often leads to issues.” On the warehouse floor, a new system gives employees instructions for picking and filling orders via headsets rather than having them rely on traditional hard-copy printouts. This upgrade has produced measurable improvements in cost efficiency and delivery speed.

In addition, United Hardware has beefed up its logistics. Whenever possible, United delivery trucks seek to carry back full loads instead of just “shipping air” on return trips. This saves the company thousands of dollars—money it can use to provide products and services at lower costs to dealers. That can provide a boost to those dealers’ competitiveness in a tight retail economy.

At the same time that United is reinvesting in its own business, it’s helping its customers improve theirs. The hardware cooperative is offering merchandising consulting, among other services. For instance, United can show hardware stores that sell plants how to boost add-on sales, as well as help those stores determine the best times of the year to have plants in stock and the best times to exit the category for the season.

This collaborative approach to customer relations fits in with Draeger’s own background. “Steve is a former Hardware Hank owner in Wausau, Wisconsin, so the culture of the co-op is deeply ingrained in his philosophy,” notes Craig Buckalew, a Hardware Hank owner in East Grand Forks and a member of the United Hardware board. “His honesty, integrity, and commitment to his dealer base are a very good fit for [United Hardware].”

The recession has by no means disappeared in the hardware retail business. United Hardware’s revenues have remained fairly flat the past few years. Still, the company has outperformed other hardware suppliers.

“With the climate we’re in today, we look at pretty much anything and everything we do to see if we can’t do it better,” Draeger says. “I would like to say that’s a normal part of business, but when times are tough you find yourself doing it to a much greater degree out of necessity rather than just because it’s the right thing to do.