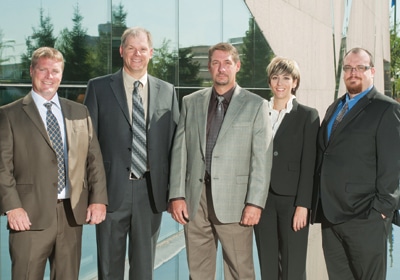 What if there was a way to remove plastics from landfills across the country, while also making use of a byproduct from coal-fueled power plants? Envirolastech has devised a way to do both: It developed a product out of the two materials that duplicates the structural strength of materials like wood, concrete, and stone.

Paul Schmitt, president of the Rochester company, worked with a team of scientists off and on since the late 1990s to develop thermoplastic compound pellets. The pellets are turned into plastic composite material that can be cut, nailed, screwed, drilled, and painted with traditional woodworking tools. And they can be used just like wood for building materials like siding, docks, retaining walls, and playground equipment.

There have been plastic composites on the market for years, but Envirolastech’s product is novel in many ways and addresses a lot of the downsides of artificial wood, says Schmitt. Thanks to the pellets’ components, the material is extremely durable. It actually becomes stronger in cold temperatures, confounding scientists because plastic normally gets more brittle as temperatures drop.

“That was the first time we saw physical properties that weren’t natural or possible to get out of plastics,” says Schmitt. “By altering different plastics and different molecular structures and tying them together, we designed a recycled plastic to do whatever we wanted without the cost.”

The material is the ultimate in green products: It’s made from 95 to 100 percent recycled components found in plastics and minerals. (One of the primary minerals used is fly ash—a fine powder or residue that is generated from burning coal in power plants.) The Envirolastech material is durable enough to last an estimated 200 to 250 years and it, too, can be recycled.

A general contractor, Schmitt became interested in developing new materials when working on large animal barns for the University of Minnesota. Stalls made from wood retained viruses and couldn’t be sterilized, and concrete walls could cause injuries if panicked animals kicked them. Existing plastic lumber just wasn’t strong enough, and for about eight years, Schmitt spent his spare time trying to come up with a solution.

In 2000, he started a company called PEC, Inc., gathered a team of scientists, and put them to work for four-and-a-half years to invent a new artificial wood from fly ash. The most abrasive mineral known to man, fly ash contains more than 25 inert minerals, including iron and aluminum. It and plastics stored since the 1950s together take up about 40 to 60 percent of space in landfills.

“I wanted to find a board for horse stalls because everyone said I couldn’t do it. I guess I didn’t believe them,” Schmitt says. “By pure trial and error and learning what happened when we mixed different ratios of fly ash and plastic, we found a way to create the properties we wanted to achieve.”

Schmitt’s team built equipment to process fly ash, created the pellet product, and developed a production process, only to put the company on hold in 2005 as the construction and investment markets crashed. By 2011, he was ready to bring the material back to market and started Envirolastech to make it happen.

The company isn’t manufacturing or selling its material just yet, but it has tested and proven 25 products that it plans to introduce to manufacturers for production. First up will be siding. “It’s not the most glamorous, but the public has already been educated on maintenance-free siding and composite siding,” says Schmitt. “We can compete on cost because the raw material is so much less, and it has durability, strength, and ease of use with standard woodworking tools.”

Already funded by a private placement, Envirolastech is now working on raising $6.6 million to get a plant in Rochester up and running and to build a second plant. Ultimately, the company plans to license its plants and pellets to other manufacturers, which could use the material to build their own products.

“This material is new and innovative,” says Schmitt. “I didn’t realize what I invented back then. What we stumbled on became massive.”