Following family tradition, he continues to strategically expand Coborn’s operations, while giving back to the communities they serve.
April 01, 2020 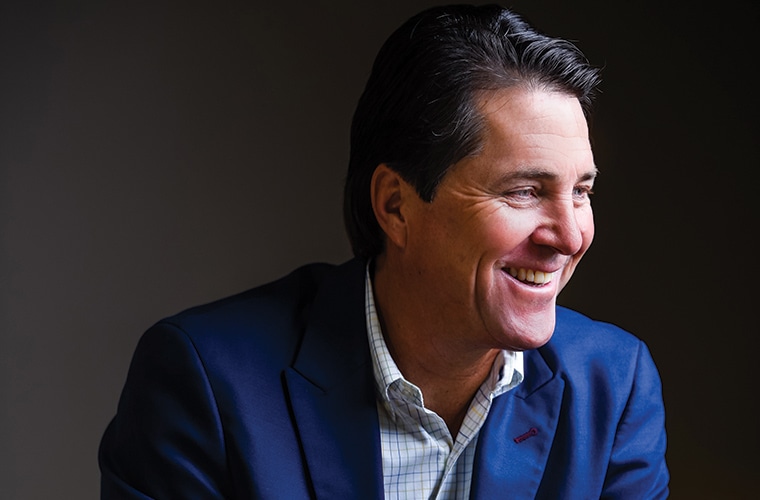 When Coborn’s Inc. was constructing its new $14.5 million corporate headquarters two years ago, company president and CEO Chris Coborn made sure that an empty office was put next to his so that his father, former CEO Dan Coborn, would have a place to land when he felt like checking up on the company.

Dan Coborn died in March at age 86, but Chris Coborn, 58, says there are no plans for his father’s office, other than to serve as a reminder of his 50-year leadership of the St. Cloud-based grocery giant.

“If I can remember half of what he taught me, I’ll be OK,” Coborn says of his father. “Maybe that office will be there for me when my kids take over.”

Food and family have been the cornerstones of the employee-owned Coborn empire for nearly a century, ever since Dan’s grandfather, Chester Coborn, opened a grocery store in Sauk Rapids. At 13, Chris and his younger brother would spend Sundays after church mopping store floors and bagging ice-packed chickens to be put on sale the next morning.

Two other staples of the Coborn’s model have been aggressive expansion and the risk-taking that goes along with it. While not every brainstorm has worked out, most have. In the early 1980s Dan Coborn opened a store in sleepy Waite Park, Minn., west of St. Cloud, betting correctly that the area would see significant development.

Similarly, Chris Coborn took an intriguing idea—ordering groceries online for delivery—and made it into a lucrative reality. The company’s 2008 purchase of SimonDelivers gave it both an entrÃ©e into e-commerce and into the Twin Cities market.

“I nearly lost my job over that acquisition,” says Coborn. “My dad wasn’t a big fan of e-commerce. But as we saw the millennials embracing the convenience of smartphones, we thought that e-commerce would have more of a presence in our industry.”

Today, Coborn’s Inc. owns 54 grocery stores and 70 convenience, liquor and other retail stores throughout the Midwest. The company has separate divisions devoted to fuel and convenience, liquor, pharmacy and an in-house manufacturing and distribution center, as well as scattered Subway, Caribou Coffee, Ace Hardware and Tops Cleaners franchises, among others.

Chris Coborn understands the risk of diversification and how it can sap a company’s core strengths if it’s mishandled. But what might seem like a pell-mell thirst for growth is actually the product of deliberation and strategic focus. “We’re accused of having a fractured focus because our core business is still food and pharmacy,” he explains. “But as the company evolved, we added fuel centers; those became standalone convenience stores. Then we decided beer, wine and spirits could complement the food stores.”

“We have a team where people have their own strengths and disciplines. It’s my job to see that they stay focused on their strategies,” says Coborn.

That boldness hasn’t escaped the eye of industry colleagues. “Coborn’s challenges the status quo, and the communities they have stores in benefit,” says Jamie Pfuhl, president of the Minnesota Grocers Association. “Chris takes his role as an industry leader seriously.”

Regardless of which division a Coborn’s move relates to, its main consideration remains population and how it could potentially change. When an oil boom started brewing in western North Dakota, the company entered into a partnership with Williston, N.D.-based JK Foods and opened several stores in that part of the state to accommodate what was sure to be a sudden influx of new residents.

“What was exciting to me was that explosion of population and getting a foothold in those communities before anyone else knew what was going on,” says Coborn. Now, as the price of crude oil drops and the region’s workforce wanes, Coborn is confident that the company is in a good position to hang on until the market stabilizes.

“A lot of it is looking at a market that has a need,” Coborn says of the company’s expansion smarts. “Do we have a business model that can fill that need? Then we do the economics around it to see if we can be viable. A lot of things go into the equation.”

Coborn’s ability to identify needs extends beyond the market. One of the company’s core values is giving back to the communities they serve. Naturally, hunger relief is one of Coborn’s passions. In 2014, Coborn’s donated more than 1.4 million fresh meals to families in need through its partnership with Second Harvest Heartland. And each year the company donates more than $3 million and thousands of volunteer hours to its local communities. In 2015, the Coborn family established the Coborn Family Foundation, donating its first gift of $1 million to St. Cloud-based CentraCare Health to establish a survivorship center adjacent to the Coborn Cancer Center. Chris Coborn’s daughter Emily, who is vice president of fresh merchandising, oversees the foundation.

Coborn is convinced his daughter, who represents the fifth generation of family leadership, will keep the company relevant through the next generation. Emily, whom Chris describes as a “foodie,” is pushing the company toward someday having half its grocery offerings be fresh and healthful products.

And as it always has, when the company is asked about establishing a brick-and-mortar presence in the Twin Cities, the polite answer from 75 miles away is, “No, thank you.” Although CobornsDelivers provides a modest and reliable income stream from the metro-area market, the company is content to let the Cubs and Supervalus of the world fight over the big town.

“A brand is a promise, and in order for us to keep that promise, it would require multiple locations and lots of capital commitment,” says Coborn. “We thought we would be best off deploying those resources in markets we’re familiar with. It’s a lot more fun to watch that battle from the outside.”