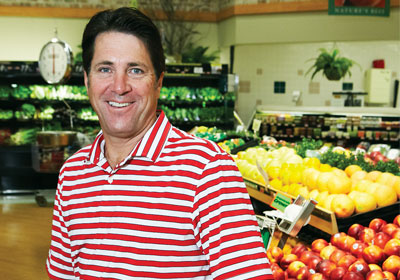 Chris Coborn remembers when his family’s supermarket business—which started out in 1921 as a single produce market in St. Cloud—had fewer than 200 employees.

Today, Coborn is its CEO and president, and his company employs about 7,000, making it one of Minnesota’s 25-largest employers. It owns and operates 42 Coborn’s, Cash Wise, and Save-A-Lot supermarkets in the upper Midwest, though most are along the I-94 corridor between St. Cloud and the Twin Cities. The company also operates liquor stores near most of its grocery stores, as well as pharmacies, video stores, and 32 Little Duke’s convenience and gas-station stores—which Chris Coborn himself concepted before the first one opened in 1986.

Coborn, who represents the fourth generation of the family’s leadership, became president in 1996 and CEO 10 years later. He’s also been a grocery buyer, marketing brand manager, operations manager, and vice president of operations.

“Chris’s strength first and foremost is his intellectual curiosity and the extent to which he embraces change within the industry,” says Bill Drake, one the company’s two outside directors and a professor in the food industry management program at Cornell University.

Not that change is always easy, of course. In 2008, Coborn’s bought failed online grocer and home-delivery service SimonDelivers, renaming it CobornsDelivers and making it into a new division. “Chris was a champion for that acquisition, but frankly, it met some resistance among the senior team,” says Drake, who spent 20 years at Supervalu. “Chris felt strongly that the organization had to participate in e-commerce because, as we all know, that is going to be very important in the future. He’s willing to take measured risks.”

There are signs that acquisition is starting to pay off. For the past few years, Coborn’s has merged its own technology and marketing skills with SimonDelivers’ merchandising experience, Coborn says. As a result, the division was profitable for three of the first five months of this year, and Coborn expects that it will stay that way the rest of the year. In June, Coborn’s rolled out CobornsDelivers Android and iPhone apps, which Coborn describes as “friendly, intuitive, and easy to use.” The apps enable customers to place orders in fewer than three minutes.

Coborn says that the diverse range of stores in his company’s holdings helped it weather the recession, as did its willingness to embrace new technology. “We used to write orders for the grocery shelves over the phone one item at a time,” Coborn says. But the company was an early adopter of computer-assisted ordering and the first grocery retailer in Minnesota to use scanning at its checkouts.

One of Coborn’s biggest points of pride is the long careers that many employees have had with the company—and the opportunities they’ve had to work their way up the ladder. For example, eight employees at the Little Falls superstore have been there since it opened 32 years ago. The current store manager got his start as a stocker, and the assistant store manager worked her way up from a part-time position.

Coborn admits to his fair share of mistakes over the years and says the company has certainly faced challenges. “My dad always told me that it was okay to make a mistake—just don’t make it twice,” he says.

One of Coborn’s toughest decisions was opting to shutter a 20-year-old deli meat and deli salad manufacturing facility in St. Cloud in July—a move that affected 90 employees. “We were making too many things in too few batches,” he says. “We lost all the efficiencies.”

Coborn’s says that his company will stick to doing what it has done best—operating stores in outstate locations and opening new ones as opportunities present themselves. As Drake observes, Coborn’s is “on the radar screen now as one of the big regional players in the United States in the industry.”