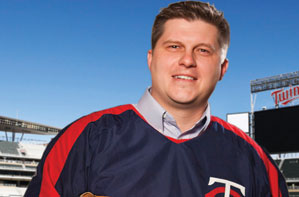 Highlight: Sponsored the stadium bill in the legislature—against the wishes of many in his party

As the Twins and Hennepin County saw their long efforts to gain legislative approval for Target Field brightening in 2006, they needed a champion in the Minnesota House of Representatives to lead the final charge. They found one in a young lawmaker from southwestern Minnesota, Brad Finstad.

It helped the Twins’ political case that Finstad was a Republican leader who had risen quickly through the party ranks during his six years in St. Paul, holding the assistant minority leader’s spot. Before that assignment, he sponsored the stadium bill—a measure opposed by most in his party.

It also didn’t hurt that Finstad himself was an amateur baseball player who believed the Twins needed an outdoor venue, coming as he did from the New Ulm area, where local “town ball” is a pretty much a way of life.

“You can go down Main Street in any town in Brown County, and you’ll find a lot of baseball talent,” Finstad says. “Everyone’s got a baseball story there—legends about the greatest town ball players, like the pitcher with the overpowering fast ball who never made it to the big leagues.

“In towns like Stark, Leavenworth, or Searles, they play in [ballparks similar to those in the movie] Field of Dreams, where the diamonds are literally next to a cornfield or under a grain elevator.”

Finstad, who retired from the legislature in 2008 and is now executive director of the Center for Rural Policy and Development in St. Peter, says he sponsored the Target Field bill because it didn’t include any state funding and used a simple mechanism—a Hennepin County sales tax—to accomplish the goal.

“When you’re sent by your neighbors to the legislature, you don’t always get to see physical results of the work you do, the impact you may have,” Finstad says. “That’s why I’ll feel a lot of pride and excitement when Target Field opens.”