Bladders Get A Boost 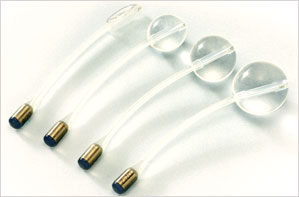 Since 2001, Uromedica has been selling its Adjustable Continence Therapy (ACT) for women and the ProACT for men internationally, and this year some of the products will debut in the United States.

Stress incontinence in women can be the result of childbearing or hysterectomy. And if a man undergoes a transurethral resection of the prostate where swollen tissue is removed, oftentimes he won’t be able to urinate normally.

Uromedica’s therapy consists of two implantable saline-filled balloons with tubes. “There are two balloons placed on either side of the bladder neck, and by changing the volume in the two balloons, you can change the diameter of the bladder neck and make the patient continent,” says Tim Cook, CEO of Plymouth-based Uromedica. The tube provides access for a catheter that is inserted to adjust the volume of the balloon. “The primary feature of this device is that it can be adjusted after it’s been implanted,” Cook says.

ProACT and ACT are implanted with a minimally invasive procedure that takes about 15 to 20 minutes. “A urologist or urogynecologist guides the delivery tool up to the bladder neck, and they see it under either [X-ray] or ultrasound,” Cook says. The balloons are adjusted as needed afterwards.