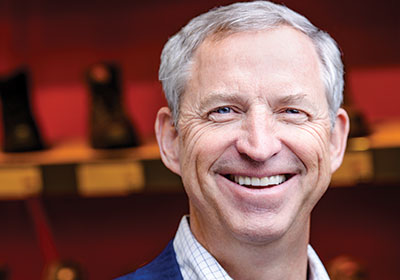 For a man who has made millions of people comfortable, Bill Sweasy sure isn’t comfortable right now. He’s been asked to talk about himself. It’s like having a pebble in his shoe.

“You should really talk to [CEO] Dave Murphy—he’s the one who’s grown the company the past 13 years,” says Sweasy, the chairman of Red Wing Shoes and its longtime CEO until last year. “Although I’m not going to say I haven’t had influence.”

That influence rests in Red Wing like a Paul Bunyan-sized bootprint, particularly the values of the city’s eponymous, and most famous, company. Just ask Murphy, the 13-year company veteran who became CEO last year.

Sells in more than 100 countries.

Established its own retail stores in the 1950s; there now are more than 450 Red Wing Shoe Stores in the United States, with plans to add 125.

“I’d guess this kind of thing is uncomfortable for him,” Murphy says with a knowing laugh. “Bill’s pretty reserved. But his impact is deeply felt around here, particularly when it comes to the well-being of the culture and the brand. It’s funny, but since I started working for him in 2001, not once, not one time, has he asked me about financial performance. It’s always about the brand and the people.”

Bill Sweasy wasn’t a newcomer to the business when he took the reins from Ole Jensen a generation ago. As a teenager, “I’d go down there after school, sometimes to clear weeds out of the pond,” Sweasy recalls. “I met this engineer from Honeywell who worked in our research department, and he tutored me in electronics and math. I was ahead of my class in algebra because he was teaching me that stuff.”

That grounding in analytical skills would prove useful as he worked his way through various departments at the company. He grew to love the whole process of making footwear, from the procurement of the boot leather taken from cowhides to the hand-stitching of the boots. When his father passed away in 1991 he had a strong sense of the company and how he wanted to steer it.

Sweasy became head of Red Wing at a difficult time. Many American shoe manufacturers were closing due to competition from lower-cost manufacturers in Asia. In 1968, 233,000 people were employed by U.S.-based shoe manufacturers; today there are 13,900. “I saw more than 600 shoe factories close their doors,” Sweasy says. “I didn’t want that to be us.” He got to work improving production efficiency, implementing just-in-time inventory reforms geared toward cycle-time reduction.

“At the time when we decided to sell a pair of shoes, it would be seven weeks before a replacement [pair] showed up in the warehouse,” Sweasy recalls. “We made adjustments so today it is less than a day—on average, two or three days.”

He also moved the company toward owning its entire supply chain, buying a tannery in 1987 in Red Wing. “We need leather,” Sweasy says. “If the tanneries were all going to go broke, where were we going to get it? Because they were all disappearing and going to China, Korea, Taiwan.”

Sweasy also sought to foster a healthy and happy workplace. At one point in the early 1990s, in response to a workers’ compensation crisis that had premiums skyrocketing and almost caused the company to move out of state, Sweasy changed the pay structure from number of shoes built to an hourly wage. He encouraged employees to rotate between jobs to lessen the risk of repetitive-motion injuries. He even let his hourly employees set their own wage, trusting they wouldn’t abuse this privilege.

“They figured out how much they could make if they really hustled, and came up with $22 an hour,” says Murphy, who wasn’t with the company then but knows the story. “Bill felt that decision would inspire and motivate the employees to make shoes at the best rate and at a safe rate and at a fair wage, and it has. Today, our starting wage is $13.10. That’s our starting wage. And it goes up to $27 an hour, plus full benefits.”

Sweasy’s attention to team building was always a priority, and a value he enforced after he left the CEO’s office.

“I’ve been in the doghouse with Bill just two or three times in 13 years, and they were about handling an employee,” Murphy says. “I hate to use the word ‘mistreated,’ but he felt I had, and that might be the right word. I hadn’t dealt with a circumstance correctly. It might have been one that the change was necessary—having to let someone go is hard and sometimes necessary. But his issue wasn’t that I had made such a decision, but how I handled it—without the sensitivity that should have been demonstrated. That’s everything to him.”

Red Wing has built a strong business in work boots; in the past decade it’s been manufacturing about a quarter of its boots for its Heritage line—boots purchased not for work but for hipness. Red Wing’s cool factor actually started in Japan about 30 years ago, when “Made in America” products had a luster to them, and the mystique spread worldwide. (That said, some Red Wing products are made overseas, notably its lower-priced Worx brand.) Sweasy appreciates this cachet but doesn’t let it carry him away. The company has survived 109 years by not chasing trends. “We’ve always been about focusing on quality,” he says.

Sweasy stepped down as CEO in March 2013, although there will be no fourth-generation Sweasy ascending to the company’s hierarchy anytime soon. His daughter has her own shoe line outside the company, and his son has hopes of opening a brewery. Sweasy says that this doesn’t bother him. He has left a clear corporate philosophy in place.

“I believe in letting other people do their jobs,” Sweasy says. “The CEO’s job is to decide what to keep track of, and orchestrating. Strategic planning more than implementation. And creating a work environment where people are engaged in their work. They have to feel that what they’re doing is valuable and not just necessary. I think people at Red Wing feel that way.”

1976
Graduates from the University of Minnesota, majoring in engineering and computer science; joins Red Wing, starting in the human resources department.

1994
Red Wing Shoes acquires plants in Missouri and Kentucky; the Kentucky plant closes in 2012, while the Missouri plant expands.

1999
Red Wing Shoes opens a retail store in the Mall of America (has since closed).

2001
Names company veteran Dave Murphy president and COO; retains roles as CEO and chairman of the board.

2013
Steps down as CEO; remains chairman.

2013
Receives the Outdoor Inspiration Award from the Outdoor Industry Association for his advocacy and work with the Red Wing Environmental Learning Center.