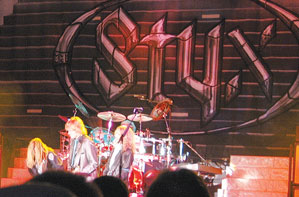 Held during the 2008 Republican National Convention, Ag-Nite was hosted by a consortium of agribusiness companies and organizations for convention delegates, dignitaries, and members of Congress. The goal was to educate guests on the importance of Minnesota agriculture to the global economy.

The venue—a renovated train depot—presented challenges, but the production team used accent and intelligent lighting, LED technology, and 26 plasma screens to highlight program messages and sponsor information. Some plasma and projection screens showed educational messages, live feeds within the venue, and live coverage of the convention.

Two concert stages hosted three bands throughout the event, with Styx headlining. Freestyle Productions provided the sound systems and concert-style lighting. The production team also created a welcome-message video from key sponsors, which was shown on plasma screens at the entrance.

The venue lacked proper height for concert production and adequate power sources. Because the venue has no loading dock and the event required a large amount of equipment, the load-in had to follow a precise schedule. A 62-person production team was necessary to set up the video and lighting elements in the just two days the team had at the venue prior to the event, and break it down in just six hours after the event was over.