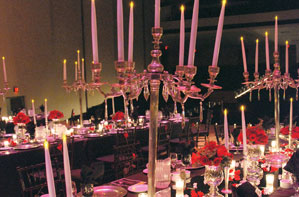 A first-annual physician society appreciation event for the organization’s 60 members and their guests drew on the Broadway play Phantom of the Opera for its theme. The party began with a cocktail reception and passed hors d’oeuvres in the mezzanine of an auditorium. A string duet played songs from Phantom. When the auditorium doors opened, fog rolled out and guests were led to the stage while an opera singer sang “Music of the Night,” a song from the show.

The stage was set with elaborately dressed tables—silver candelabras, red rose buds, and dark linens— and featured red lighting and up-lit chandeliers. Between courses, the singer performed ballads from the Broadway show. After dinner, a motivational speaker gave a talk titled “No One Can Whistle a Symphony . . . It Takes an Orchestra to Play It.”

It took several discussions with the venue staff to persuade them to cater the event on the auditorium stage, due to its long distance from the kitchen. The planner worked closely with the chef to choose dishes that would hold up prior to serving and to create a theme dessert: a Phantom mask made with white chocolate.