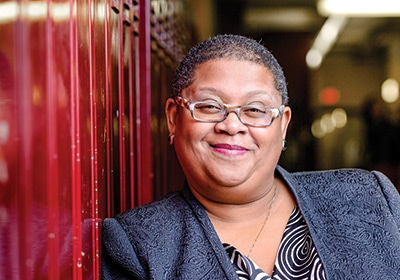 Bernadeia Johnson became superintendent of Minneapolis’s schools in 2010 following a period of high turnover in the position. She leads a district with some of the state’s best and worst performing schools and has embarked on a challenging agenda to quickly address the achievement gap.

The watchword of your tenure is likely to be “shift.” Explain what it means to the layperson.

Shift is about ending top-down and asking: How do we support schools? How do we engage the community to think about what schools need? How do we foster innovation and creativity at the school level? Are there barriers we’re creating? It’s about autonomy with accountability. Incremental changes were not satisfying. The district had to change.

It sounds empowering and liberating. In practice it’s probably a bear, huh?

Systems are hard to change. We have to think differently. Like when the school year began with the record heat. We told our department heads to go to the schools with Popsicles and ice and see how you can help. It’s a different mindset than going with a list of instructions.

We’re also figuring out how we sit down with a school community and get them to think about what accountability means. Ownership drives motivation, but outcomes are key, too.

The school board has vacillated between aggressive and timid over the years. What’s its role in this?

We’re adding a new type of school (partnership schools) management. Five to ten schools initially. Changes in working conditions in these schools will need to be negotiated with the MFT (Minneapolis Federation of Teachers) [union]. The board will do that.

Is the MFT a partner in this or an obstacle?

Lynn [Nordgren, union leader], is interested in supporting it, but we have yet to get to it in contract negotiations. The union will have to give up some of its control.

By and large, seniority still governs which teachers teach in which classrooms, right?

To a great extent yes. Shift means that schools should have the ability to pick whatever teacher is needed for the learning environment. Right now we have to interview 10 Minneapolis teachers before we can interview an outside candidate. When we started the year we had 20 unfilled positions [because of rules like this].

The MFT gained these prerogatives during a period of relative placidity in public education. Are they relevant today?

The rules need to be updated. I see why unions exist. There were abuses that needed addressing . . .

But we’re through the looking glass now, aren’t we? You have an ineffective teacher and you can’t really address it without two years of hearings and peer counseling, right?

At one school they cut the band program because it was the easiest way to deal with an ineffective teacher.

The MFT have argued they are accountable to principals, but many of your principals are not capable leaders and mentors and they behave capriciously.

It’s not where we want it, but we are creating a principal’s academy modeled after a successful program in New York City. Corporate support from Cargill, Medtronic, General Mills, among others, has helped us get there.

One of the MFT’s most reasonable arguments is that teachers cannot undo the damage done to kids through poverty, unstable homes, and the sundry other problems students bring to school.

I don’t disagree with that. But schools can be a stabilizing force. We can’t make things out of our control excuses for failure. These are such big societal problems that if we do, we might as well close our doors. I can’t negotiate a contract where every kid has a stable home and feels safe. But I don’t believe the schools can do it alone, no.

One of Shift’s premises is that you need the right teacher for the right classroom environment. Is there evidence that teachers with specialized skill sets are more effective in reaching troubled kids?

We’re going to find out. Think of it this way: Our schools are passive recipients of education graduates. Shame on us. We need to partner better with education institutions to get what we need.

Diversity. Cultural competence. Mindset. People who believe in their ability to make change.

Let’s talk for a minute about your other district, the district of high-performing, overcrowded schools in southwest Minneapolis. The part of MPS that gets little attention and whose parents feel vaguely ignored (speaking as one of them).

I don’t disagree with you. Southwest High School has been the No. 1 ranked high school in the state for several years and I sensed that we were almost ashamed of it, to have such success [and so many failing schools] in the same system. But we have to recognize these schools and be proud of what they do.

There’s not a lot in common between your challenged schools and your academically thriving schools, is there?

No. It’s like we have three different districts, north, southeast, and southwest. They have different needs and we have to provide resources based on school needs.

How do you take those successes and replicate them for the families that can’t get into overcommitted schools like Southwest or Armatage Montessori or Barton Open?

You don’t do it by moving their leaders to other schools, which some people suggest. I thought about asking Bill Smith (Southwest principal) to take over Washburn, but when you have a great leader in a school you have to know when to leave well enough alone. It comes down to getting the right teachers and principals.

Are you trying to build on these successes or is all the focus on the North Side?

Mayor Rybak sent his kids to private school and early in his tenure was silent about the public schools. In recent years he’s become an advocate. How did that come about?

I think he understands that so goes MPS, so goes Minneapolis.

What do you need from the next mayor?

The mayor has a platform to talk more about education and the challenges, using his or her influence to leverage resources.

What can the broader community do for MPS?

They are doing a lot already. We’ve come a long way. We’ve had growth of organizations like AchieveMpls that are changing the landscape and narrative. There is a lot more philanthropy and funds coming in.

How can smaller and medium-sized businesses partner with MPS—businesses without philanthropy departments?

We’re looking for graduation coaches to mentor kids through the high school process. Our StepUp program needs 2000 summer jobs. It gets kids familiar with going to a job, motivates them to see themselves with a career. They work in a law office and end up in law school. We need cash donations for field trips, to reward and recognize teachers. We need volunteers to read in schools.