He’s been in business since his teens. Now he’s cleaning up in the software business.
April 01, 2020 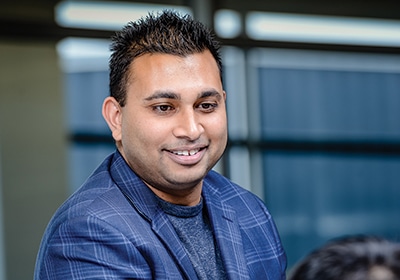 Fun Fact
Shah has never worked for anyone outside of his family.

Ameet Shah has been an entrepreneur since he was 15, when he started his own travel agency. Shortly afterward, he shifted to selling cellphones and accessories and by the time he was 19, he launched a business based on his experience growing up in Burnsville.

Since he was 5, Shah’s family has owned a dry cleaning operation—Oxboro Cleaners, now located in Bloomington. Combining his experiences at the business during his childhood with his interest in technology, Shah founded Shah Corp. in 1997 to help cleaners boost their business via the most current version of Windows. At that time it was Windows 95, and only about 25 percent of dry cleaners had a computerized system. “So it was a great opportunity to get into the space,” says Shah, 36.

Shah’s net worth crossed the $1 million threshold half a decade ago, but he says that this didn’t make much of an impression on him personally. In the tech business, he notes, “the overhead is so expensive that once you can offset that with the revenue, that’s when things became a lot easier.” That turning point happened about five years ago. So he’s been too busy building his business to pay much attention to his net worth.

He began Shah Corp. by providing customers with his proprietary software. But by 2002, he saw he could deliver an even better service to by creating a web-based application through a new division called Cleaner Business Systems (CBS). The application allows shops to perform accounts receivable, employee tracking, inventory management, and production and delivery-route management, as well as marketing. It’s now used by 1,700 customers in all 50 states and in other countries. Shah also owns a few dry cleaning establishments, as well as some commercial retail properties. But CBS represents his chief income stream.

CBS does have competitors, but Shah believes he has assets that those competitors don’t have. One is strong customer service. “The people who answer our phone are helpdesk people,” he says. “If the customer has an issue, we’re going to take care of it quickly. Our average hold time is under a minute. That’s really what we’ve driven our business off of.” CBS also has a hardware loaner program: If the cleaning business has a computer down, CBS will ship them a loaner while it replaces or repairs theirs at no cost to them. “We don’t want to see a customer down,” Shah says.

In addition to running his businesses, Shah chairs the Burnsville Chamber of Commerce and serves on the city’s economic development commission. “I feel I can add value, since I operate a number of entities that I own, as well as my real estate interests,” he says.

Shah hopes to add value to his entrepreneurial mini-empire by developing another software product that has the kind of reach CBS has had. “I imagine we’ll be moving into another market [in addition to dry cleaning] in the next two to three years,” he says. “It hasn’t yet been determined what that will be, but we’re going to try to leverage some of the infrastructure we already have with our developer resources and helpdesk and sales people.” He’ll be tapping the capabilities of Cloud Clarity, his IT development and managed-services company.