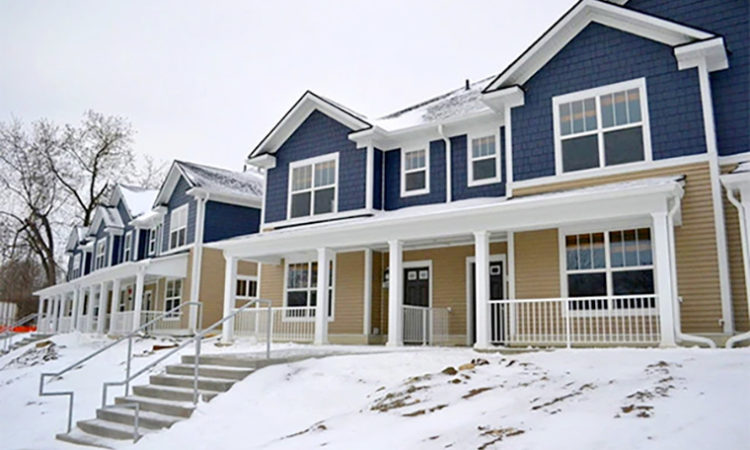 Townhomes in Minnehaha. (Photo from the Minneapolis Housing Authority)

Single-family homes are on the downtrend, but multi-family units appear to be on the rise.
By Dan Niepow
May 31, 2019

Construction of new single-family homes in the Twin Cities continued a downward trend in May.

According to the Keystone Report for Housing First Minnesota, single-family home construction in May fell 3 percent year over year. That marks four consecutive months of year-over-year declines.

The report tabulated building permits in the Twin Cities’ 13-county region. For the month of May, there were 637 permits issued for single-family homes. Permits for multifamily homes appear to be on the rise, though. Permits for larger projects in Minneapolis and Minnetonka brought the number of multifamily units up to 1,306, marking a “significant increase” over the same month last year.

In a statement, Housing First Minnesota president John Rask says recent weather conditions and continued affordability issues are “having an impact” on the housing market.

David Arbit, director of research and economics at the Minneapolis Area Association of Realtors (MAAR), says the factors holding back construction of new homes are “abundantly clear:” lots, labor, lending, and lumber.

“The shortage of lots has driven up the cost of land, which is passed on to consumers,” Arbit tells TCB.

Ditto for labor: Increased labor costs also are driving up overall costs, he says. Lending is a slightly different story. Although mortgage loans are “doing OK,” there’s some hesitation among lenders of other types of loans — specifically ADC loans, or acquisition, development, and construction loans.

“The memories of being burned after the [2008 housing bubble] are still kind of fresh on their minds, and so they’re a little bit hesitant still,” Arbit says.

On the lumber front, tariffs on foreign goods are impacting building costs, too.

As construction of single-family units declines, the Twin Cities continues to face a “supply crisis” for affordable homes.

“The housing market is extremely under supplied at the lower price points and we cannot build at a price to relieve that pressure, which is keeping many homebuyers on the sidelines,” Housing First’s Rask says in a statement.

Research from the Realtors’ association confirms the supply issue. There are much fewer homes available that cost less than $250,000. According to MAAR’s April supply data, the existing inventory of homes under $250,000 would sell out in just about a month if no new homes were built.

But for homes costing more than $1 million, there’s enough supply to last more than 10 months.

“Our market is undersupplied overall, but not across every price point,” Arbit says.

“If you would ask me at the beginning of the year, I would have expected it to be higher than last year,” Tousley says. “2018 was a good year for single family—not a great year, but good. So I was expecting to see some gains, and pretty much right out of the gate this year it’s been trending down negatively.”