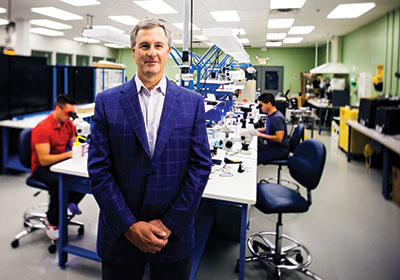 Holaira Takes A Deep Breath And Dives In

The Plymouth company has recruited a top CEO and raised $29 million as it plans to enter the lung therapy market.
October 01, 2013

Wahr previously served as CEO for two local med-tech companies that were sold off to big industry players. In 2001, Wahr co-founded and served as CEO of cardiology device company Velocimed, Inc., which was sold to Little Canada–based St. Jude Medical, Inc., in 2005 for $82.5 million. Later he led Lutonix, Inc., which was sold to New Jersey–based C. R. Bard, Inc., in late 2011, in a $225 million deal that calls for an additional $100 million once the product is approved by the U.S. Food and Drug Administration. (Lutonix developed a drug-coated angioplasty balloon technology to treat arterial disease.)

“I had been on what I considered sabbatical after selling the last [company],” Wahr says. “These guys contacted me. …They reached out to me and said that they were starting a CEO search.”

Holaira, which was started in Seattle in 2008 as Innovative Pulmonary Solutions, Inc., is working to develop a lung therapy that will make it easier for patients with chronic obstructive pulmonary disease (COPD) to breathe. The chronic condition affects an estimated 13 million people in the United States and more than 64 million people worldwide.

“Ours is a lung denervation therapy, which is an alternative to inhaler therapy,” Wahr says. It will be used to relax a patient’s nerves. “This is truly an innovative product. It’s never been done before.”

When Wahr looked at the company, he liked what he saw. He signed on as president and CEO in September 2012. The company relocated to Plymouth in January and rebranded itself with a new name, which Wahr says is an invented word that refers to providing air to the whole lung. “It’s hard to name a company,” he says. “All new companies basically have to create a new word.” Holaira has about 30 employees.

“The company was really at a position where it was poised to have a real growth spurt,” Wahr says. “We have four well-established venture capital firms that have financed the company and sit on the board. That was very attractive to me.”

In February, the company announced completion of $10 million in Series C private equity financing from four existing investors. To date, the company has raised a total of $29 million in financing.

“Dennis is about as seasoned a clinical leader in the med-tech field as you can find. …We think he’s just a terrific fit,” says Kirk Nielsen, managing director of Versant Ventures, who sits on the Holaira board. “We’ve got some very encouraging clinical data.”

Nielsen notes that Versant was also an investor in Lutonix. Wahr, a native of Michigan, practiced as an interventional cardiologist for more than a decade before moving to Minnesota to start Velocimed.

The development-stage Holaira has no revenue yet, “so it’s pretty easy to track,” jokes Wahr.

Wahr says Holaira plans to start a second-phase clinical trial for its product in 2014. He estimated that the product could be available outside the United States in two to three years—medical devices typically gain approvals more quickly abroad than they do here—and in the United States in four to five years. As Wahr knows from experience, developing new medical devices is a long-haul game.

“I think it’s fair to say that the industry standard you have to look at is an eight- to 10-year development track. That’s the nature of the beast,” Wahr says.