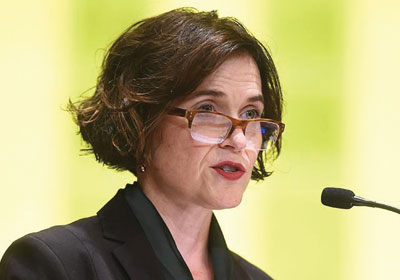 Hodges Backs Off On Calls For A Fair-Scheduling Ordinance

In a statement released today, Minneapolis Mayor Betsy Hodges said concerns raised by businesses will take longer to resolve than the current timetable for passage of an ordinance allows.
October 25, 2015

Minneapolis Mayor Betsy Hodges Wednesday said she will back off on her calls for a fair-scheduling ordinance and concentrate on passing mandatory paid sick leave.

Hodges said in a statement released just after noon that concerns raised by business people will take longer to resolve than the current timetable for passage allows. Hodges and City Council backers of the Working Families Agenda have said they want the ordinances to be voted on by the end of 2015.

The council can pursue the issue without the mayor's support but her decision not to support a higher minimum wage in Minneapolis alone made that issue less politically tenable. And Council Vice President Elizabeth Glidden said she agrees with the mayor's decision.

The council has asked city staff to pursue formal oridances on fair scheduling and sick leave. Glidden said staff will procede only with the sick leave issue and a public hearing set for Nov. 4 will take place on that issue.

Hodges, who announced her plan at her state of the city speech in April, said she will continue to push for the paid sick leave plan as well as a city emphasis on helping enforce laws against “wage theft” — not paying workers for hours worked or other violations of fair wage laws.

“I will also work actively to ensure the passage of policies to provide earned sick and safe time, and further protections against wage theft,” the statement said. “And I continue to believe that our future prosperity depends on our ensuring that our growth includes everyone.”

But it was fair scheduling — requiring advance notice of work schedules and requiring extra pay when schedules are adjusted or when scheduled work hours are canceled — that drew most of the criticism from businesses, especially restaurant owners.

“I have come to the conclusion that we are not in a position to resolve the concerns satisfactorily on the timeline currently contemplated,” Hodges wrote. “For this reason, I am announcing today that I am moving forward with the agenda to ensure earned sick and safe time and to protect against wage theft, and that for now, fair scheduling policies will not be the focus of the work.”

But the first-term mayor said she is not giving up her hopes of having a fair-scheduling ordinance in the city. Minneapolis would have been just the second city to have such a law, but a draft of the plan was far more sweeping and would have covered far more workers than San Francisco’s ordinance.

“Let me be clear: the inability of too many low-income, hourly, and part-time workers to plan their lives predictably in order to get ahead is still a problem in our city,” Hodges wrote. “We should not stop looking for a solution until it stops being a problem.

“I will continue to listen to and engage with businesses, workers, advocates, and residents to identify a policy solution around fair scheduling that works, and I thank everyone who has put their time and hard work into this important discussion.”

Unlike the fair scheduling issue, Minneapolis would be less of a pioneer on mandatory paid sick leave. According to A Better Balance, a proponent of the policy, four states, 19 cities and one county have paid sick leave laws.

Glidden, who chairs the Committee of the Whole that is to hear the issue and who was a co-sponsor of the fair-scheduling ordinance, said she knew Hodges was going to change course and agrees with the decision.

While Glidden said she still wants to address the underlying problem of unpredictable and last-minute scheduling for some workers, she said there needs to be more time to consider the details and avoid unexpected consequences.

“It is no secret that fair scheduling is a much-newer conversation and that people are not as familiar with it as they are with paid sick leave,” Glidden said. “It needs more time and conversation.”

Greta Bergstrom, communications director for TakeAction Minnesota, was critical of state business organizations for lobbying against the ordinances.

“The MN Biz Partnership tried to pass a local interference bill at the state Legislaure last session, which was ultimately defeated,” Bergstrom said.” This greenlighted the ability oflocal municipalities like Minneapolis to move forward on their own. Today we see this same oppostional influence working overtime to defeat worker-led scheduling protections in Minneapolis.”

Minneapolis Works, a coalition of community, labor and religious groups backing the changes, called the Hodges decision “incredibly disappointing” but said it would take her at her word that she would keep working on the issue.

“We should not stop looking for a solution until it stops being a problem,” the group said in a press statement. “In that spirit, we invite businesses of all sizes, workers and city leaders to come together to solve this crisis, not just shout down proposals.”