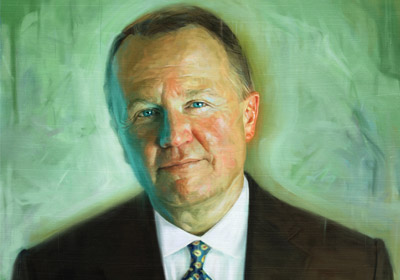 Twenty years ago Jim Hays and five friends launched Hays Companies, a commercial risk insurance firm. Today it’s the 16th-largest of its kind in the country.
By Dennis B. McGrath
February 01, 2014

Twenty years ago, six young friends, four of whom grew up in North Minneapolis, managed to scrape together $300,000 to start up a business of their own to market commercial risk insurance.

Not a big deal, you say? It is today.

That business, Hays Companies, is now the 16th-largest commercial insurance brokerage firm in America, the largest in the Midwest and the fourth-largest privately held such firm in the country. It has offices in 36 U.S. locations and employs some 750 people, one-third of them at its downtown Minneapolis headquarters.

Hays Companies clients include many blue chip corporations from this region and throughout the country, as well as thousands of small to medium-sized businesses.

“Our best advertising is news coverage of natural disasters and corporate misfeasance,” Hays states. The catalyst for major growth in the commercial risk insurance market began in the early 1990s, he explains, when then New York attorney general Eliot Spitzer began his investigations of Wall Street misbehavior.

In addition to their primary business, Hays and his partners also own interests in a Kansas City-based business that markets and distributes propane tanks throughout the South, a couple of manufacturers, a Burnsville-based asset management company, a number of apartment buildings and several banks. The company also co-owned Minneapolis-based Despatch Industries, the world’s largest manufacturer of industrial ovens and furnaces for the thermal technology, solar and carbon fiber industries. Despatch was sold in 2011 to ITW (Illinois Tool Works), a global diversified manufacturer.

Perhaps the most unusual business the group owns is Sports Statistics, which it recently sold to Sports Radar, which it also owns shares in. Sports Statistics employs many college students who are paid to monitor results of sporting events and then report and relay scores and individual team member performance stats. The results are then relayed to subscribers who need real-time results. “Legalized gambling is the future,” Hays claims. “New Jersey Governor Chris Christie has already endorsed it for his state.”

An uncharacteristic investment flop was an upscale Minneapolis area restaurant, Subo, that closed after 18 months of operation. “That was the only business I ever owned that I woke up worrying about,” he says.

Hays has a rosy outlook for Hays Companies’ primary commercial risk management business. “There’s nothing but upside for our industry,” he says. “People want to protect themselves. Companies want to take risks off the table and are willing to pay to distribute it. Our property and casualty business is growing by 10 percent and our employee benefits consulting business is growing by 15 percent a year.”

Still, there is, unquestionably, no shortage of risk management and benefit insurance competitors in this region and this country. Why has Hays Companies been able to achieve such impressive ongoing growth in that competitive climate? Hays answers the question without hesitation.

“Most of our competitors run their business by statistics,” he says. “We use statistics too [as measurements], but our secret is that we hire the best people and we still run our own business. We work harder, we pay more and we have more fun. We believe in our people and they stick with us because we pay them well and give them the tools to do the job. People have come to us from many competitors. There’s no better place to work.”

Management expects hard work, unimpeachable ethics and quality results, he says; at the same time, Hays Companies employees can always find help, particularly when they are going through personal or family struggles. “We do what we think is best for our customers and our people,” he says. “Everybody who works here goes home at night.”

After graduating from Patrick Henry High School, Hays worked as a cook for the Di Napoli restaurant, a downtown Minneapolis institution, and attended the University of Minnesota, graduating in 1979. He added an MBA shortly thereafter. His first job in the business world, with GTA (Grain Terminal Association), “wasn’t a good fit” and lasted just six months. Next came positions with two commercial insurance firms. In 1987, he opened a local office for AON and seven years later, formed Hays Companies with his five partners.

Hays and his wife, Chris, have three adult children and four grandchildren. Their daughter Jessica works as an employee benefits broker. Oldest son Jeff has his own insurance wholesaling company in Boston, and works with his younger brother Tom.

A fit 56, Hays cuts a good-sized swath in both political and celebrity circles these days. He’s a passionate history buff and the walls of his office on the seventh floor of the IDS Center are covered with art depicting scenes in American history, dominated by a stunning 4-by-6-foot oil painting of the signers of the Constitution. There are also framed and signed photos from famous contemporary Americans, most prominently of his close friend, the late astronaut and space pioneer Neil Armstrong.

Hays met Armstrong 10 years ago when the astronaut spoke at his firm’s annual meeting. The two of them bonded rapidly, discovering they had similar values and interests, and sustained the friendship. Over the past decade, they met frequently and, Hays recalls, could “sit and talk for hours.” Armstrong’s widow, Carol, remains a close friend.

“Neil became a mentor,” Hays explains, “and I named our Lloyd’s of London syndicate Apollo in honor of Neil and his lunar mission,” when he became the first person to walk on the moon.

In local political circles, Hays is perhaps best known as a big supporter and a benefactor of Norm Coleman, former St. Paul mayor and Republican senator for Minnesota from 2003 to 2009, but in the past he’s also supported Democrats like Bob Short and Mike Hatch, both candidates for governor.

“I’m fiscally conservative but socially progressive,” he says. “I’m comfortable with both sides of the aisle, but there’s no question that right now, we have to right the ship [of state] financially, both nationally and here in Minnesota.” He claims no political aspirations of his own.

With risk and its management his business, does Hays worry about any risks of his own?

“Perhaps the fear of failure—nothing else,” he answers. “All the problems come to me, of course, but that’s true for all CEOs. I’m pretty much as happy as I was when growing up in North Minneapolis. Happiness is all relative, anyway. I like to talk about happiness over a glass of wine with my colleagues. I don’t worry about money. I worry about time and how much we have left.”

Jim Hays and the other founders haven’t forgotten about their North Minneapolis roots. Each year, they underwrite eight to 10 four-year college scholarships to graduates of Patrick Henry High School through a six-figure donation to the Education Partnership Foundation created by late Medtronic CEO Win Wallin, another of Hays’ heroes and mentors.

Dennis B. McGrath is a senior counselor at Himle Rapp & Co.