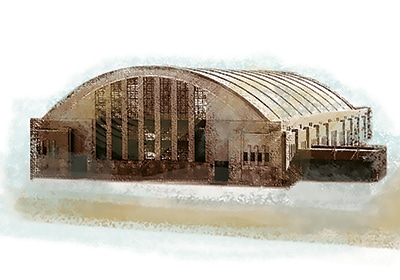 Has The Armory’s Time Finally Come?

A new concert and event venue may finally repurpose the Minneapolis landmark.
October 10, 2015

The Minneapolis Armory is an unassuming building that practically sits in the shadows of the rising U.S. Bank Stadium on the east side of downtown. Built for the state’s National Guard—and later hosting political conventions, concerts and the Minneapolis Lakers basketball team—the building is listed on the National Register of Historic Places and has been a parking garage since the late 1990s.

But that’s about to change. Minneapolis-based Swervo Development Corp., run by prolific developer Ned Abdul, recently purchased the building for about $6 million, with the intent of returning the building to its one-time use as a concert and event space.

The idea isn’t exactly new. Doug Hoskin, principal at Minneapolis-based Interstate Parking Co., bought the armory from Hennepin County in 1999 for $2.6 million to turn it into a parking ramp. But several years ago, he floated a makeover that would turn the structure into a 6,000-seat concert venue.

A market analysis projected a need for 45 to 55 concerts a year to make the work viable, but no promoter could promise more than 25. That left a $700,000 revenue gap in Hoskin’s pro forma.

“It was simply unfinanceable,” he says.

Now Abdul has stepped in and says he has a plan to transform the aging building as Downtown East blooms.

“We think this is a unique property in the Twin Cities in terms of size, location and the range of events it can handle,” Swervo spokesman Jon Austin says, brushing off concerns about competition with similar-sized venues like Roy Wilkins Auditorium in downtown St. Paul.

Swervo intends to “preserve and extend” the building, given its NRHP designation. Officials declined to detail a timeline but maintain the plan is “on track.”

As for potential tie-ins to Vikings games or other events, Austin says Swervo is open to the idea.

“There’s great potential to work with all of our new and anticipated neighbors,” he says. “We want to talk to all of them.”