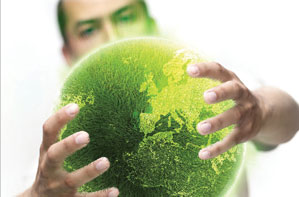 Green and the Bottom Line

How do companies decide which green initiatives bring real value to customers, the business, and the environment?
February 01, 2010

Everybody is an environmentalist these days, or so it seems. According to the brochures, the product labels, and the corporate spokespeople, every company in America is a devoted friend of the Earth.

There is even a word that applies to false, misleading, or overstated claims about the environmental benefits of a company’s products or practices. It’s called “greenwashing.” The term is used to denigrate rather lukewarm green efforts that are made mostly for marketing purposes and have limited environmental impact.

A company that takes its environmental impact seriously must use some criteria to sort the options and identify the things it can and will do. However altruistic its mission statement, a business must consider ROI when choosing which green initiatives it will pursue.

Eden Prairie-based ADC is a $1.15 billion-a-year manufacturer with factories in the U.S., Mexico, China, India, Germany, and elsewhere. Its core business is connectivity hardware. Its primary customers are telecommunications companies.

Chief Technology Officer Mike Day chairs ADC’s corporate responsibility and green steering committee. For more than a year, the committee has been studying a question with far-reaching implications: What green initiatives will become standard for ADC as it moves from a “reactive” stance of compliance with environmental regulations to what Day calls a proactive phase?

If compliance is a minimum baseline and corporate resources are finite, Day says, the question becomes, “What degree of proactivity is consistent with our values and our customers’ needs?” Some time this year, ADC expects to emerge with “a multiyear plan to get us to the right level in an orderly way.”

The committee has been looking at environmental issues in three broad categories. They provide a helpful framework for other companies thinking about the subject.

• Facilities-based issues have to do with how the company runs its own offices and factories. Concerns include things like solid-waste disposal, energy efficiency, and air and water quality. Compliance baselines come in the form of local, state, and national regulations (the U.S. Clean Air Act, for instance) in every country where ADC has operations.

• Products and services issues are about product composition and the end of a product’s life. “Anything that gets produced in a factory sooner or later winds up in a landfill,” Day says. Led by the European Union, countries including the United States are adopting or considering legislation that affects manufacturers, rather than just those who dispose of old products. These regulations target matters including the chemical composition of products that may be sold within a nation’s borders. Acronyms like RoHS (restrictions of hazardous substances), WEEE (waste from electrical and electronic equipment) and REACH (registration, evaluation, authorization, and restriction of chemical substances) are becoming increasingly familiar to manufacturers around the world.

• Customer issues involve ways that ADC can help its customers stay in compliance with changing regulations, or cut their energy consumption, or operate in a more sustainable way. For instance, Day says, ADC sells products that help data centers stay cooler and use less energy. And it has a service division that removes obsolete equipment from offices for telecommunications companies.

Day says that a swarm of strategic and tactical issues spring from each of the three categories. Considering products and services, for instance, ADC sells equipment in more than 130 countries with different and ever-changing environmental regulations. A strong business case probably can be made for a proactive approach to manufacturing operations and product development that would get out in front of the global regulatory wave, ensuring that ADC products could be purchased confidently by customers anywhere.

In other cases, Day says, the business case for particular green initiatives will be less clear. ADC often receives surveys from various interest groups “that clearly are designed to pressure us to make some investments that don’t align with our market interests.” He declined to name examples.

3M, which already has entire catalogs filled with products that offer energy savings or other sustainable advantages, has a long-established process for deciding which green possibilities to pursue. Keith Miller, 3M’s manager of environmental initiatives and sustainability, says that product ideas go through a life-cycle analysis that looks at their impact on health, safety, and the environment from the raw material stage through manufacturing, customer use, and disposal.

ROI and brand image factor into 3M’s decision process, as they will at ADC. But how does 3M identify green initiatives that it won’t undertake?

As an example, Millers offers the fact that the company makes many products for the wind and solar power industries, but it has no wind turbine or solar collectors to power its corporate headquarters. Though the PR value might be significant, and some employees, in fact, have expressed interest in a turbine, the environmental impact would be miniscule in terms of 3M’s “overall footprint,” Miller says. “[A turbine] doesn’t have the ROI to compete with other projects. We can do energy conservation in a lot of ways with better returns.”

Decisions about which environmental initiatives will make the largest impact will vary depending on the company. St. Paul–based Ecolab, the Fortune 500 maker of cleaning and sanitation products, spent about $500,000 to redesign a research and development center in Eagan that then earned LEED Gold certification in 2009. But considering the nature and scope of Ecolab’s business, that green effort arguably amounted to a token gesture.

“If you take a look at our business, most of the environmental impact we can have occurs at our customers’ locations, not in our own facilities,” says Bruce Cords, Ecolab’s vice president of environment, food safety, and public health. The company’s products are used to wash more than 250 million dishes a day in restaurants and other food-service operations, he says. “We wash a lot of hands, too. Then throw in packaging, because except when we load bulk tanks, the packages we ship become the customer’s problem to get rid of.”

Thus, he argues, Ecolab not only pleases its customers but makes a very real environmental contribution when, for instance, it switches from shipping its Warewash detergent product in 40-pound, five-gallon pails and begins sending the stuff to customers in plastic-wrapped capsules. “People only need so many minnow buckets,” Cords says.

Likewise, he says, Ecolab’s Wash and Walk floor-cleaning product, which cleans greasy floors in restaurant kitchens with no need to rinse after use, has attracted 80,000 customers in North America alone. It also saves more than 500 million gallons of water per year for those customers.

Given its customers’ increasing concern with sustainability, and especially with the cost-saving aspects of reducing water and energy use, “green” has become almost synonymous with “revenue” in Ecolab’s product-development process. “Five years ago, a concept-feasibility study would include an analysis of ROI and [whether the product would make Ecolab] a market leader,” Cords says. “Now, it’s: Will it reduce water use, energy use, or packaging, or [involve] safer chemical ingredients for the user or the environment? If you check one or more, that’s a winner.”

What will Ecolab not do in the name of going green? It won’t reduce the quality or performance of its products, Cords says. Given the wind patterns in the Twin Cities, it won’t install wind turbines to power its buildings. (“So far, we haven’t found a way to make that pay off here.”) And it won’t trade one environmental problem for another that might be worse.

For example, Ecolab would like to depend less on petroleum as a base for some of its products. An alternative would be “bio-based” carbon sources. But as with corn-based ethanol, these present their own environmental difficulties. “We’ve looked at palm oil–based ingredients,” Cords says. “But palm oil also is used in food. There are cases where they’ve been cutting rainforests to plant palm trees. That doesn’t look like a good trade to us.”

In 2005, Caribou Coffee, headquartered in Brooklyn Center, began a push to buy its coffee beans only from growers who achieve certification by the Rainforest Alliance (RFA). The certification process involves signing off on everything from land use and wastewater practices to workers’ living conditions.

Chad Trewick, who heads Caribou’s coffee-sourcing operations, says that the percentage of Caribou beans coming from Rainforest Alliance–certified farms has been growing steadily: from 47 percent in 2007 to an estimated 67 percent in 2009.

Caribou believes in the Rainforest Alliance’s principles, Trewick says. But he also sees the initiative as a matter of corporate survival. “Not long ago, a lot of coffee farmers were abandoning ship because the cost of production was outpacing the market price . . . . My charge is to see that Caribou engages in mutually beneficial relations with its suppliers,” Trewick says. The extra pennies per pound he pays to compensate growers for modifications necessary for certification can help some stay in business—and assure him of a steady supply of coffee.

There are other grower certification programs, such as Fair Trade Certification or organic certification. But Trewick says that the Rainforest Alliance’s multifaceted initiative “combines environmental responsibility with sound business practices. When we engage [growers] in an RFA certification scheme, it’s an opportunity for them to introduce modern business methods.” These can keep a farm not just earth friendly but economically viable.

Fair Trade Certification has worthy goals, Trewick says, but it is designed specifically to benefit “small-scale, impoverished farmers.” By demanding Fair Trade Certification, Caribou would exclude some long-time suppliers with larger plantations. As for organic certification, “that’s complex for coffee production, because you’re sentencing growers to some ugly years until the soil is cleared of chemicals.”

Asking suppliers for Rainforest Alliance certification was a relatively easy call, from both a business and environmental perspective. What’s an example of a tougher issue for the company on the green front?

“Reusable containers for the people who buy coffee beans in our stores,” Trewick says. Caribou dispenses a lot of plastic and paper bags. It would like to use fewer. “But we don’t want to use a container that someone can’t clean properly,” he says, “because that creates a negative flavor in new beans.