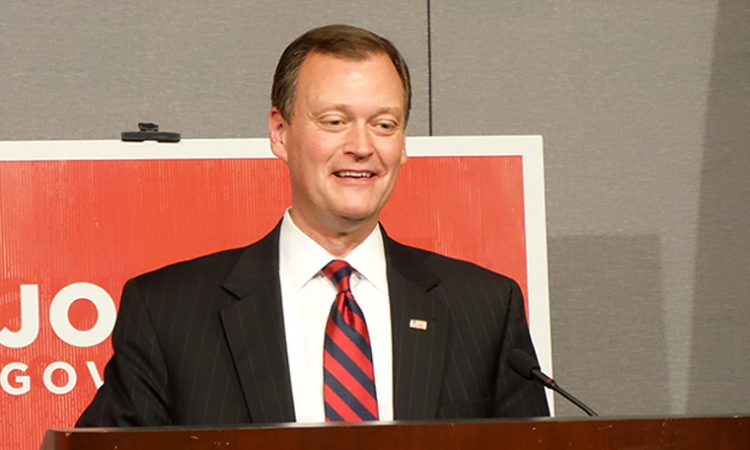 Jeff Johnson, the Republican candidate for governor in Minnesota. ( Photo by Peter Callaghan/MinnPost)

Gov. Candidates Walz and Johnson Fundamentally Disagree on Immigration (and Much More)

The issue might offer the most obvious contrast between the GOP and DFL candidates for governor — according to the candidates themselves.
By Peter Callaghan
August 30, 2018

Johnson, a Hennepin County commissioner, ran to the right of former Gov. Tim Pawlenty and has stayed there going into the general election against U.S. Rep. Walz. In the handful of forums and debates that have featured the two candidates — both before and after the Aug. 14 primary — it was a rarity for them to agree on the most contentious issues.

That said, the subject that offers the most stark contrast might be immigration and refugee resettlement.

Don’t think so? The candidates do.

“This is a place where Jeff and I fundamentally disagree,” Walz said during an appearance with Johnson on Twin Cities PBS’ “Almanac” three days after both won their primaries.

“I have a very different perspective on this,” Johnson said before talking about immigration policies during a preprimary forum in Mankato.

How important an issue?

A statewide poll of 500 likely voters conducted between Aug. 17 and 20 by Suffolk University for the St. Cloud Times found that immigration might not be a top-of-mind issue for Minnesota voters, especially in the race for governor.

Immigration was cited more frequently when those same voters were asked about issues in the U.S. Senate races. In those two contests, 26.2 percent agreed that health care was most important, 21.60 percent said the economy, and 14.6 percent said immigration.

At a press conference in July, Johnson called for a suspension of the state’s involvement in refugee resettlement, saying the state has 2 percent of the U.S. population but has accepted 13 percent of the resettled refugees.

“I don’t think refugee resettlement is intrinsically bad,” he said. “I think if you go back 30-40 years there are some remarkable success stories you could talk about with refugee resettlement. But lately the program is just not working for Minnesota. Let’s step back and ask how do we make sure the refugees who are here are achieving the American Dream, because many of them aren’t right now.”

In both that press conference and in a column by Johnson published on AlphaNews, Johnson cited a 2017 University of Notre Dame study that tried to quantify the costs to the U.S. of refugees. William Evans, the chair of the university’s Department of Economics, and research assistant Daniel Fitzgerald used National Bureau of Economic Research data to estimate that the average cost is $107,000, not including costs to school districts and local governments.

What Johnson does not include in his citation of the Notre Dame study, however, is its conclusion that within eight years of arrival, adult refugees are paying more in taxes than they receive in benefits. “… the evidence indicates that refugees who enter the United States as working-age adults provide a fiscal benefit over the long term,” Evans told the university’s news bureau. He also noted that the benefits are even greater for refugees who enter the U.S. as children.

Walz frames his support for immigration and continuing the state’s openness to refugee resettlement in terms that are both moral and economic. During the Mankato forum, he said: “We know what it says on the Statue of Liberty. It doesn’t say, ‘Get the Hell Out.’ ”

“The positive nature of immigration and the refugee resettlement program is adding not just to the diversity of the communities, but it’s adding to economic growth,” Walz said on “Almanac.” “It’s adding to the sense of where Minnesota has always been, that there’s something that we pride ourselves on as a nation of immigrants.”

A January 2017 report by Ryan Allen at the Humphrey School of Public Affairs argues that the state will need migrants – both domestic and international — to fulfill its workforce needs over the next several decades.

“Without a substantial increase of migration to Minnesota in the future,” the study states, “the state’s labor force will likely grow much slower than it has in recent years. This will make filling job vacancies more challenging in the future.” 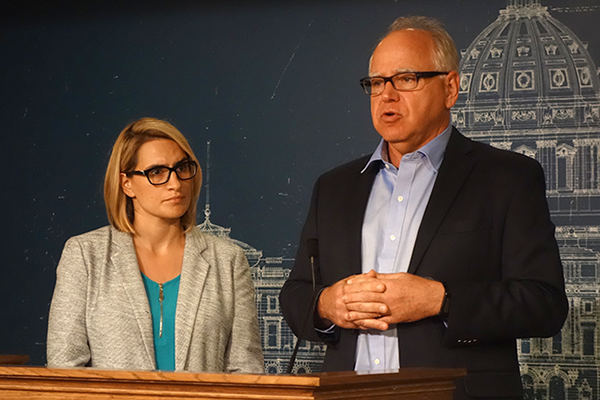 Walz says often that the state needs these immigrants to stay economically competitive. During a press conference in June in the midst of the family separation crisis, he said, “This is not who we are; this is not what we stand for.

Johnson has used the issue to argue that DFLers and progressives are not open to talking about what he thinks many in the state are concerned about.

“We have citizens in St. Cloud who came forward and said we want to know what the cost of this is because we think it’s significant,” Johnson said in Mankato. “The answer to them was not, ‘Let’s figure that out.’ The answer was, ‘You are racist and you are white supremacist and shut up.’ ”

DFLers often frame opposition to immigration as racial and religious intolerance, partly because some of the anti-immigration statements have coincided with anti-Muslim rhetoric. “The rhetoric we are hearing in Washington, D.C., is rhetoric we’re going to hear in this election,” former DFL candidate Erin Murphy said in Mankato. “It’s meant to divide us against one another. And that might help in the short run, but it hurts us in the long term.”

Walz, who has represented the First Congressional District since 2007, said he thinks GOP leadership in the U.S. House doesn’t want to pass compromise immigration reform because they would prefer to have it available as a “wedge issue” this campaign.

“Every sovereign nation has a responsibility to control its borders,” Walz said at the Mankato forum. “You can do that in a smart manner. We need to tell our neighbors who want rule of law, who say why don’t people just get in line and come through the line to get here … there is no line to get into, because there is no legal way for people to move into that.”

Johnson has also attempted to make border security an issue, pointing to some on the Democratic Party’s left who have demanded the abolishment of the federal Immigration and Customs Enforcement agency, known as ICE.

A new Politico/Morning Consult poll indicated that just one in four voters think the agency should be eliminated. A plurality of Democrats, however, support such a move — 43 percent to 34 percent with the rest undecided. Majorities of Republicans — 79 percent — and those who identify as independents — 54 percent — support keeping the agency that emerged from post-9/11 legal changes.

Walz told the “Almanac” audience that immigration enforcement is a federal responsibility, while local law enforcement is a state and local job. He supports what are called separation ordinances that prevent local police from asking the immigration status of those they come in contract with. “States that separate those two things clearly have lower crime rates, they have better integration and they have safer cities,” Walz said.

In an interview before the primary, Walz said he does not support abolishing ICE. “Reform certainly,” he said. “More importantly, give them clear direction of what the mission is. Let them carry out the mission of immigration control and enforcement, but on the front end where it’s not seen as a punitive force that comes in.”

“A lot of time the left will talk about immigration when they’re talking about illegal immigration,” Johnson said. “And I actually believe that we as a state should work with the federal government to enforce the immigration laws. Tim believes we should become a sanctuary state; I do not. I don’t think that is the right place for Minnesota to be. We are a state of laws and we are a country of laws and we should enforce them.”