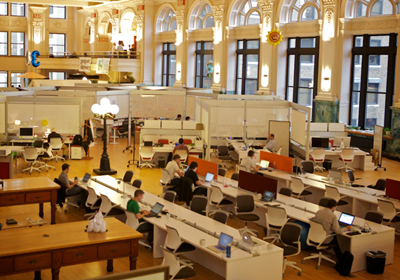 The event, called Google for Entrepreneurs Day, will take place on February 20.

CoCo offers alternative office space to freelance professionals, small businesses, and corporate work groups. It has locations in St. Paul and Minneapolis; the Google event will take place at CoCo’s space on the former trading floor of the historic Minneapolis Grain Exchange building.

CoCo said that Google for Entrepreneurs Day will kick off with a “special announcement”—and cofounder Don Ball declined to disclose additional details, saying that he’s been “sworn to secrecy.”

Speakers will then discuss entrepreneurship and innovation in Minnesota before beginning Google-led workshops—one for “businesspeople, marketers, and creatives,” and another for developers and technology professionals. Google officials leading the workshops will be experts in various Google products, such as Google+, Google Analytics, and Android, Ball said. The event will be followed by a cocktail reception.

All 240 tickets for the free event were claimed by noon on Wednesday after CoCo announced the event, and a 60-person waitlist also filled up quickly, according to Ball. But due to significant interest in the event, CoCo is considering live-streaming Google for Entrepreneurs Day. To sign up to receive more information about how to view the event or to be notified if more seats open up, click here.

Google for Entrepreneurs Day is not the first event to bring Google representatives to CoCo. In late 2011, Google Chairman Erik Schmidt joined Minneapolis Mayor R.T. Rybak and several local business leaders at CoCo, where Schmidt praised the Twin Cities’ culture of entrepreneurship, saying it’s unlike anything else he’s witnessed in the United States.

Schmidt relayed his admiration for the Twin Cities to others at Google, who then contacted CoCo about collaborating on events like the one planned for next month, according to Ball. The company has made other appearances here, as well: Last May, Google officials visited the Twin Cities to provide training for 100 interns who were hired through the City of Minneapolis’ Step-Up program, which connects businesses with young workers.

Ball said that such events are evidence of national recognition that the Twin Cities is home to a growing entrepreneurial scene.

“Google is taking an interest in us. You might think on the surface that we’re not an entrepreneurial hub, but there’s growing activity here,” Ball said. “Google looks around the planet—they’re truly an international company—and they’re looking at cities they want to make a commitment to.”