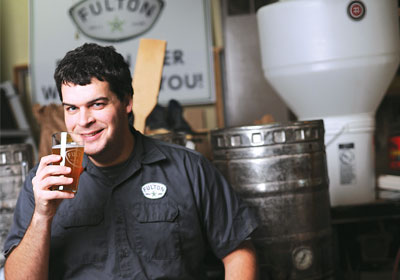 Good Beer, for the People

While there certainly are beer snobs in Minnesota, the Minnesota brewers who make the brews that beer snobs prize are a notably unsnobbish lot. That’s definitely true of the four fellas who founded Fulton Beer. Their Minneapolis company’s slogan is “Ordinary guys brewing extraordinary beer.” Though they want to produce full-bodied, assertive beers, they don’t want to limit their following to an in-the-know coterie. “We want our uncles and grandparents to drink our beer,” cofounder Jim Diley says.

The founders are old friends hoping to turn their homebrewing hobby into a business: Diley’s an attorney; Brian Hoffman’s a scientist, Peter Grande is a contractor, and Ryan Petz is an MBA student at the Carlson School of Management. They may not be quitting their day jobs and studies soon. But things look promising.

Fulton officially launched its beer in late October at the Happy Gnome, a St. Paul restaurant and bar considered one of the holiest sites among local beer geeks. All 10 kegs of its first brew, Sweet Child of Vine, a hoppy pale ale, sold out quickly. By mid-December, Fulton beer had been picked up by 19 Twin Cities venues.

The company is called Fulton Beer, not Fulton Brewing. It doesn’t expect to have its own brewery for a few years. Fulton’s beers are currently being produced at the Black River Falls, Wisconsin, facility of craft brewer Sand Creek. But “they didn’t want us to just hand them a recipe,” Petz says. Instead, the four participate in production when their schedules allow. It’s providing training for when they take up their own production.

Fulton currently lists five beers on its site, including the Libertine (a red ale) and the Worthy Adversary (an imperial stout, a stronger and heartier version of standard, Guinness-style stout). When these other brews will be available remained up in the air as of early January, but Fulton says that it plans to do a seasonal release soon.

“We’re going to let people tell us what they want us to make,” Hoffman says. It’s part of the company’s local emphasis. Its name comes from the Minneapolis neighborhood where their brewing adventures began (in Diley’s basement). That local flavor carries over in the company’s Ful10 Fund. At the end of each year, Fulton plans to use 10 percent of its profits in order to finance entrepreneurs unable to obtain funding through other channels.

It may be a while until the founders can contribute. Then again, given Minnesota’s thirst for new craft beer, maybe not.