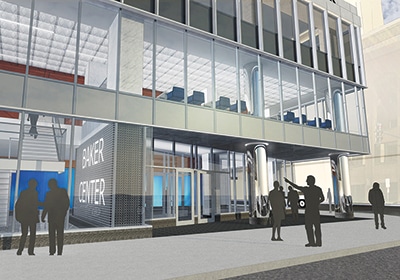 At Baker Center, the challenge is how to make its four aging office buildings inviting to other companies. Reed Christianson, a principal with the Minneapolis office of commercial real estate firm Transwestern, says that plans call for creating an “art deco hotel feel” for the new entrance and lobby at Eighth and Marquette. “There’s a lot of tenant demand for the North Loop,” says Christianson. “We’re trying to create that same type of product in the middle of downtown.”

Will the new Baker be hip enough? No leases had been signed as Twin Cities Business went to press. Christianson declines comment on the update’s cost; media reports put it at $20 million. The facelift will be finished next spring.

Plans at Northstar Center are not as far along. The California-based owners of the two-tower complex floated plans last spring for converting Northstar East into 266 apartments. But there’s been no update as Northstar East is being shopped to developers or investment groups interested in tackling the conversion. (Northstar West would remain office space.)

Wells Fargo has 20,000 employees in Minnesota; 7,000 of those are in downtown Minneapolis. The bank did not add any jobs as part of its real estate shuffle. Despite the move, Hobot says Wells continues to use nine downtown buildings.

While it will clearly take time to fill the empty space, some market watchers are encouraged. “I admire the fact that owners are trying to be creative about bringing more natural light into the space,” says veteran real estate broker Jim Vos, principal with the Minneapolis office of Cresa. Baker Center has a notable history: It was once home to Cargill Inc.