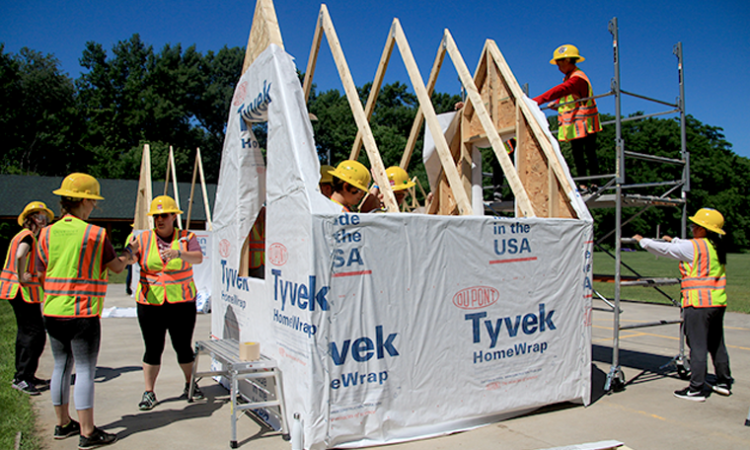 The project is exactly the sort of experience that organizers with Girl Scouts River Valleys and Dunwoody College of Technology had envisioned when they teamed up to launch a new STEM-focused camp session.
By Erin Hinrichs
July 05, 2018

Last week, at Camp Lakamaga in Marine on St. Croix, many of the signature Girl Scout camp features were on full display: spontaneous group singing, friendship bracelets and campfires.

At this particular camp, however, there was also a hands-on project not typically associated with adolescent girls to keep them busy each day: constructing tiny homes.

All 80 campers, grades 6 to 12, pitched in to help build two tiny homes from scratch in just five days. And when they weren’t busy testing out power tools and hammering, they got to enjoy the outdoors by kayaking or tent pitching or doing other activities of their choosing.

For Nicole Lamothe, 13, a student in the Rosemount-Apple Valley-Eagan Schools district, the promise of using power tools is what convinced her to sign up for this camp.

She’d already gained some familiarity with construction terms and tools in shop class — an elective that she didn't hesitate to enroll in, even though it's typically not as popular among her female peers. And by the end of the week at camp she was even more encouraged to continue pursuing these trade skills on her own. “We have a bunch of power tools in our basement,” she said during an interview last Thursday afternoon, next to the construction site. “I may be asking my mom to get those out.”

Lamothe says she’d like to put these sorts of skills to use in a future job. Having this unique camp experience, she adds, helped solidify that vision — not just because of the hands-on experience, but also because she feels empowered by the all-female team environment.

“I think that, together, we can accomplish whatever we put our minds to,” she said, pointing over her shoulder to the nearly framed-in tiny house she’d been working on. “Look — we built houses.”

This is exactly the sort of experience that camp organizers with Girl Scouts River Valleysand Dunwoody College of Technology had envisioned when they teamed up to launch this new STEM-focused camp session.

“When we combined construction trades and engineering with a space that’s designed just for girls … it filled immediately,” said Hannah Gilbert, STEM program manager and director of Camp Lakamaga with the Girl Scouts River Valleys. “It sort of myth busts a bit — about what girls are interested in.”

Gilbert says she and her colleagues have been partnering with staff at Dunwoody for years, but those learning opportunities always took place on campus. These day programs were jam-packed with tutorials on things like woodworking, welding and other types of construction trades and engineering skills.

“They were good, but we felt like we could go bigger,” Gilbert said. 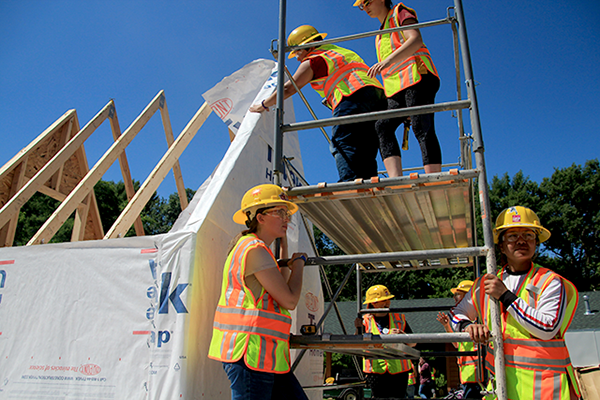 Dunwoody's Bridget Reynolds along with one other female assistant from Dunwoody coached the girls along, giving them a list of assignments each day and demonstrating how to use new tools as the project progressed. (Photo by Erin Hinrichs)

So she held a focus group with her Girl Scouts to see how they might provide them with a more impactful construction-based camp experience. The girls told her they wanted more construction time and more outdoor time.

While at camp, they split construction shifts. Reynolds — or “Shamrock,” as the girls dubbed her at camp — along with one other female assistant from Dunwoody coached the girls along, giving them a list of assignments each day and demonstrating how to use new tools as the project progressed.

“Giving them an opportunity to be with their friends — and know that they don’t have to admit that they haven’t tried a saw, or that they don’t know the difference between this screwdriver and that screwdriver — really allows them to just be themselves, realize that everybody else may not have tried this,” she said. “And then it’s really about us, the role models. They get to see us showing them how to do it. We don’t have all the answers either. And that’s OK.”

Reynolds has a personal interest in breaking down barriers to construction and other trade jobs for women. At Dunwoody, she says this field is still “extremely male-dominated;” and that starts far down the pipeline in high school welding and automotive classes, where females are typically underrepresented. 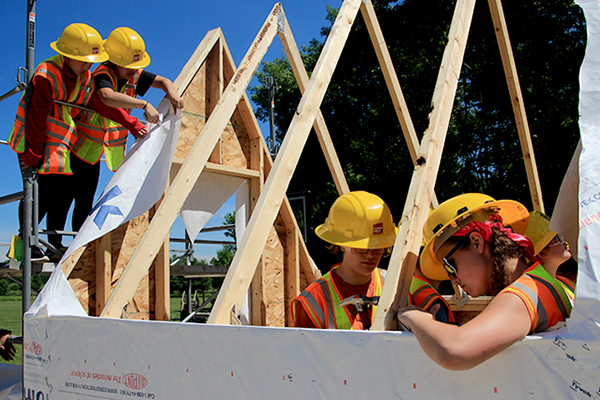 Women make up just 9 percent of construction workers in the U.S. — despite the fact that jobs are available. (Photo by Erin Hinriches)

Women make up just 9 percent of construction workers in the U.S. — despite the fact that jobs are available, with decent wages and competitive benefits that don’t generally mirror the gender pay-gap endemic in many other sectors of the economy.

Next summer, returning campers, along with newcomers, will work on completing the interior of the two tiny homes that they constructed this summer. They’ll get to shift to a new set of skills: things like plumbing, electrical work and interior design.

Reflecting on the progression from day one to day four, Reynolds said there was a lot of jumping when the saw started up that first day.

“Now they don’t blink an eye when the saw goes,” she said. “They’re excited today because they get to use three new tools and they can’t wait to figure out what they are.”