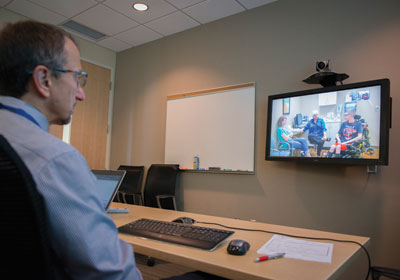 Gillette Children’s Specialty Healthcare continues to expand its telemedicine program with the addition of services in the Brainerd/Baxter area in central Minnesota earlier this month.

Telemedicine has been touted as a boon to improving access to health care in rural areas or smaller cities outside large metropolitan areas. Patients can see doctors through a live television connection for remote appointments. A telemedicine appointment can save families a long drive to the metro and missing time away from school or work.

St. Paul-based Gillette began offering telemedicine in 2006 in Sioux Falls, South Dakota. It expanded to Duluth in 2014 and Mankato in 2015. For its newest service Gillette has partnered with St. Joseph’s-Baxter Clinic, operated by Duluth-based Essentia Health.

“It’s just the same as a clinic appointment,” says Marybeth Fitzgerald, senior planning and business development consultant for Gillette. “Patients love it…I have had so many patients say ‘I would do that again tomorrow.’ It’s so easy, it’s so simple. It just makes so much sense to the families.”

In Duluth and Mankato, Gillette offers services for sleep medicine; Sioux Falls focuses on orthopedics. The new outpost in Baxter will offer both of those services, as well as craniofacial (referring to bones of the skull and face) and plastic surgery services. Patients still need to travel to Gillette’s St. Paul hospital for surgery.

Technology improvements and efforts to control health care costs are two factors driving the growth of telemedicine. One recent study found that the U.S. telemedicine business is expanding quickly with an annual growth rate of more than 50 percent.

Fitzgerald notes that telemedicine providers must follow numerous guidelines and laws. Doctors providing telemedicine, for example, must have a license to practice in the state where the patient is based. For its Sioux Falls services, doctors must be licensed in South Dakota.

“There’s a lot of state regulations around telemedicine,” says Fitzgerald.

The Minnesota Telemedicine Act, passed in 2015, included a provision requiring insurers to cover telemedicine appointments just as they would cover an in-person appointment at a clinic. The measure had support from the Minnesota Hospital Association as a tool for smaller Minnesota communities to maintain access to health care.