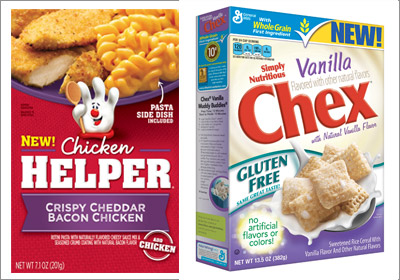 Key to the company’s new product strategy are a revamped Hamburger Helper brand and new snacks for on-the-go customers.
July 19, 2013

General Mills, Inc., on Tuesday said it is planning to debut 200 new products—some representing extensions of existing product lines and others marking more of a departure from the current portfolio—this summer.

Last month, in conjunction with the release of its latest fiscal-year financial results, Golden Valley-based General Mills teased a few upcoming product launches, including Vanilla Chex and Nature Valley Protein Granola. But it revealed a more detailed lineup Tuesday during an investor meeting in New York.

Some new products have already hit shelves, while others will roll out throughout the summer. Within the category of snacks and “mini-meals,” new products include Nature Valley Greek Yogurt protein bars, Fiber One protein peanut butter bars, and some new yogurt products in Canada and the United Kingdom, among others.

For new quick-meal products, General Mills is focusing largely on its Hamburger Helper brand, which the company is looking to significantly revamp, and which it now simply calls “Helper.” General Mills’ new Ultimate Helper line will include four flavors—three-cheese marinara, creamy stroganoff, creamy parmesan, and cheddar broccoli—and feature a pouch of sauce, unlike previous offerings.

And the company has added new chicken offerings under the Helper brand, including crispy cheddar bacon chicken and crispy ranch chicken. (The Star Tribune recently reported on General Mills’ plans to revamp Hamburger Helper through new packaging and a shift in marketing strategy.)

New products under the Old El Paso brand include Mexican cooking sauces, frozen entrees, and Old El Paso Stand ’N Stuff tortillas—which are described as a “first-of-its kind soft flour tortilla that stands up, making it easy to fill and eat with no need to roll up.”

The company is also expanding its gluten-free offerings with products such as Betty Crocker gluten-free sugar cookie mix and Pillsbury gluten-free thin-crust pizza dough. For the dessert aisle, new products include a line of cookie mixes, cupcake mixes, and frostings made with flavors such as Hershey’s, Reese’s, and Almond Joy. That line represents a strengthened partnership between Hershey’s and General Mills’ Betty Crocker brand. (The company is also introducing Hershey’s Cookies ’n Creme cereal.)

For a more comprehensive list of new General Mills products, view the company’s press release here. For an image slideshow of some of General Mills’ new products, click here.

General Mills Chairman and CEO Ken Powell, who rang the opening bell at the New York Stock Exchange on Tuesday, told CNBC that “convenience is a key part of what we do,” and many of the latest product innovations are meant to cater to on-the-go customers. He also emphasized the revamp of Hamburger Helper, saying the company is “renovating” the brand.

“Product innovation is the fuel that creates category growth,” Powell said in a statement. “We have a robust new product plan, with more than 200 new items being introduced worldwide in the first half of the year alone.”

A report by Dow Jones Business News pointed out that this year’s list of new products is longer than last year’s, when General Mills products such as Fiber One protein bars and a 100-calorie version of Greek Yogurt helped fuel sales. The performance of new products will be important for increasing sales volume, something that investors want to see from food companies, Dow Jones said.

General Mills recently announced that its fourth-quarter earnings, which were fueled largely by international sales and new businesses, climbed 13 percent to $366 million, or $0.55 per share, while revenue increased 8 percent to $4.41 billion.

For its full fiscal year, which ended May 26, General Mills’ earned $1.86 billion, up more than 18 percent from the prior year, while sales climbed 7 percent to $17.8 billion. General Mills is among Minnesota’s 10 largest public companies based on revenue.

Shares of General Mills’ stock opened at $49.51 Tuesday, up 0.4 percent from Monday’s closing price. Shares were trading up another 0.4 percent at $49.50 mid-Tuesday morning.