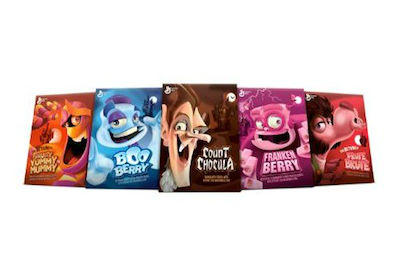 The Golden Valley-based food giant is returning its “Big G Monsters Cereals” exclusively to Target shelves by early September and for a limited time.
August 31, 2013

As part of a Halloween promotion, General Mills, Inc., is re-releasing all five of its “Big G Monsters Cereals” for a limited time this fall.

While the Count Chocula, Franken Berry, and Boo Berry cereals regularly appear around Halloween, General Mills is re-introducing Frute Brute (discontinued in 1982) and Fruity Yummy Mummy (discontinued in 1992) to this year’s seasonal collection.

Through an exclusive agreement, the food manufacturer is distributing the retro packaged cereals at Target Corporation stores nationwide. The cereals will be available for a suggested retail price of $2.50 per box.

While the re-release of the five “Big G Monsters Cereals” will occur this fall, General Mills previously announced plans to debut 200 new products this summer, including gluten-free offerings and new breakfast products.

Based in Golden Valley, General Mills distributes to more than 100 countries. It is among Minnesota’s 10 largest public companies based on revenue.

The “Monsters” cereal brand has gained a loyal following since the Count Chocula and Franken Berry cereals were first introduced in 1971, General Mills said.

“Boomers and Gen-X’ers grew up with the ‘Monsters Cereals,’” General Mills Marketing Manager Ari Zainuddin said in a statement. “Saturday morning meant cartoons and a bowl of Count Chocula or Franken Berry. They want to share those memories with their kids and this seasonal favorite brings back all kinds of fond family nostalgia.”