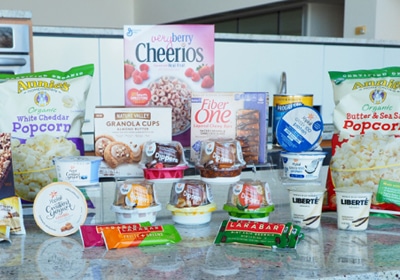 Many of the food company’s new items were under its organic Lärabar and Annie’s brands, which have flourished as of late, and its Yoplait brand, which has struggled.
January 20, 2017

General Mills unveiled dozens of new products on Tuesday, many of which highlight the Golden Valley-based food company’s shift toward healthy items free of artificial colors, flavors or sweeteners.

Among the products most prominently featured in General Mills’ winter 2017 product line were yogurts and granola or snack bars.

Following a positive second quarter performance in its organic products segment, General Mills said it is expanding its lineup of LÃ¤rabar brand bars. Among several new additions, LÃ¤rabar will include a new Fruits and Greens series that incorporates flavors like Mango Spinach Cashew. Another popular organic brand, Annie’s, is receiving new popcorn flavors.

“Snacking presents a tremendous growth opportunity for General Mills,” CEO Ken Powell said in a statement. “Our products are in 97 percent of U.S. consumer households and about one-third of our global sales are international.”

Despite the company’s prevalence around the world, General Mills has reported year-over-year sales declines every quarter since the three-month period ending May 31, 2015, when its sales were flat.

For decades, the food giant has relied on the sale of processed and carb-laden foods, which it is trying to change as trends show many consumers seeking gluten-free, dairy-free, vegan and non-GMO foods. (TCB analyzed General Mills’ diet change in our March 2016 issue.)

The company’s Yoplait yogurt brand, which has faced rocky sales since the rise of Greek yogurt brands like Fage and Chobani, is upping the protein in its Yoplait Greek cups (to about 14 to 15 grams) and rolling out a custard-style yogurt that is free of artificial colors and flavors.

General Mills is also hoping to nudge Yoplait more into the snack category with a line of Dippers brand cups, which include pretzel rounds for dipping.

More on changes to General Mills’ existing products or the launch of new products in its winter 2017 lineup can be found here.