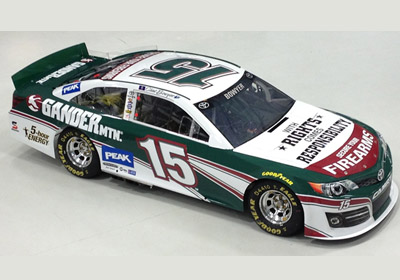 As part of a larger gun-safety campaign, the hood of a Gander Mountain-sponsored Nascar race car will feature the phrases “With Rights Comes Responsibility” and “Secure Your Firearms.”
April 14, 2013

Gander Mountain recently announced plans for a broad marketing campaign to advocate for responsible gun ownership—a message that it will promote on the hood of a Nascar race car.

Those tuning in to the Sprint Cup Series NRA 500 on April 13 will be able to spot the Gander Mountain logo on the number 15 car, which is driven by Clint Bowyer. The hood of the car will feature the phrases “With Rights Comes Responsibility” and “Secure Your Firearms.”

The move comes amid a national debate over gun control, and at a time when demand for certain types of ammunition is spiking.

Gander Mountain, a St. Paul-based retailer of outdoor and sporting goods, said the Nascar sponsorship is just one facet of a broader campaign aimed at promoting responsible firearm use.

For example, beginning Friday, people can visit gandermountain.com to take a “responsibility pledge,” and the company is also encouraging the use of the hashtag #responsibilitypledge in social media “to raise awareness and encourage accountability on the subject of responsible ownership.” The company said it will also disseminate its message through newspaper advertising and other initiatives throughout the year.

Additionally, Gander Mountain said it will implement a company policy that requires all employees to encourage customers who purchase firearms to have the proper equipment to safeguard them.

The company already offers firearm training programs at Gander Mountain Academy, which has several locations, including one in Lakeville. The facilities feature live and simulated firing ranges, as well as classroom training.

“As a leading outdoors retailer, Gander Mountain is committed to the mandate of responsible firearms ownership, and the importance of guarding against firearms getting into the hands of the under-aged, untrained, and unauthorized,” Executive Vice President of Marketing Steve Uline said in a statement. “We believe that with rights comes responsibility. For existing firearms owners and those considering becoming an owner, personal responsibility is paramount.”

The marketing campaign could also serve, of course, to boost Gander Mountain’s sales; the company sells a variety of safes, locks, and other firearm storage and security equipment.

Gander Mountain’s new campaign comes amid a broad national debate regarding gun control, which intensified following the December shooting at Sandy Hook Elementary School in Newtown, Connecticut. In Minnesota, gun-control legislation introduced in February focuses on background checks for buyers and harsher penalties for those who sell guns to unqualified purchasers.

Ammunition, meanwhile, has been flying off of store shelves. A Gander Mountain spokesperson recently told Twin Cities Business that the company has limited the quantity of ammunition that customers can purchase at certain locations “due to high demand and in the interest of fairness for our customers.”

Ammunition manufacturers are having a difficult time keeping up with demand. For example, Federal Premium Ammunition, an Anoka-based subsidiary of Alliant Techsystems, posted a notification on its website regarding a spike in demand, saying that it is working “seven days a week, making multiple daily shipments to meet the current demand.”

Gander Mountain is among Minnesota’s 25 largest private companies based on revenue, which is estimated to exceed $1 billion annually. The company operates 119 stores in 24 states.