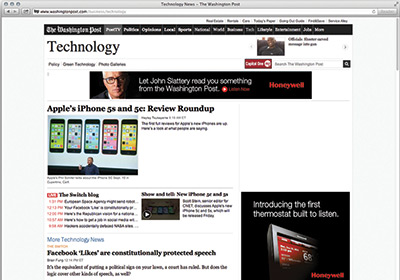 For John Slattery, The Story Is The Message

John Slattery pitches Honeywell without ever mentioning its name.
December 07, 2013

It’s not just crisp suits that have sharp lines in Mad Men. Just as starched are the separations between the creative and media disciplines. So it’s notable that a Mad Men star, John Slattery (Roger Sterling), was featured in a clutter-cutting campaign that ran recently for Honeywell’s new voice-activated thermostat.

The online creative, accessed by clicking a big banner ad on the websites of the New York Times, Washington Post, Mashable, or Gizmodo, features Slattery reading an actual tech-oriented story on each news service’s site. While reading, Slattery takes a break to talk to the thermostat, which then automatically adjusts.

“All of this came out of an idea with a strategy of ‘How do you make this stand out in a sea of other innovative tech products?’ ” says Chris Lange, founder and creative co-chair at the ad agency mono.

The goal was broader than just reaching the consumer target of adults 25 to 54, says Andrea Luhtanen, president of Haworth, which handled media negotiations. “We were trying to reach industry influencers to sell product, but also set the tone that Honeywell is a leader in technology and innovation.”

The same leading-edge outlook could be said about Haworth and mono.

The campaign, meant to highlight Honeywell’s innovation, was an innovative collaboration in its own right between creative agency mono and Haworth, both based in Minneapolis.

“We feel so strongly that the magic happens when the creative and media sit at the same table together to bring these ideas to life,” says Luhtanen. The spell is hard enough to cast when creative and media are housed together. It’s even more unusual when it’s done with different firms.

But Haworth, a firm of 135 employees (who also own the company) is used to outside collaboration, especially with clients like Target. This collaboration with mono needed to extend to media negotiations as well, because just as there are still often-distinct delineations between creative and media departments, the wall between advertising and editorial is also still in place.

A particular challenge was incorporating the actual news copy written by journalists at the news organizations where the ads appeared “because they needed to know how the integrity of their work would be represented,” says Maggie Lunetta, associate media director at Haworth.

Beyond online execution, print ads were purchased in the New York Times and Washington Post. Per client request, Haworth didn’t reveal billings, but the campaign was modest and short: only four days in September. But that was enough for the press to take notice—and, ideally, draw attention to Honeywell and the home-building and remodeling industries.