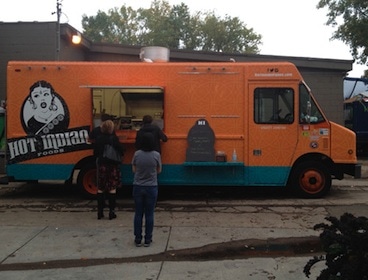 Hot Indian Foods is the latest mobile eatery to take up a permanent residence, having announced plans to open a Midtown Global Market location by May.

The Minneapolis-based food truck, which travels throughout the Twin Cities, will be taking the place of The Left-Handed Cook, which vacated its space earlier this year after it joined the full-service Rabbit Hole, according to Twin Cities Business’ sister publication Mpls.St.Paul magazine.

Owner Amol Dixit and chef Janene Holig will continue to offer the truck’s culinary hits at its Midtown Global Market counter, according to the magazine, including an Indian version of a burrito, wrapped in traditional bread called “roti.” The expanded space will allow Dixit and Holig to offer more fillings via a Chipotle-style serving line.

The trend of food truck owners opening stand-alone restaurants has steadily grown during the past couple of years. Many truck owners suggest that the incentive to open a permanent location lies in year-round patronage and a larger variety of menu offerings.