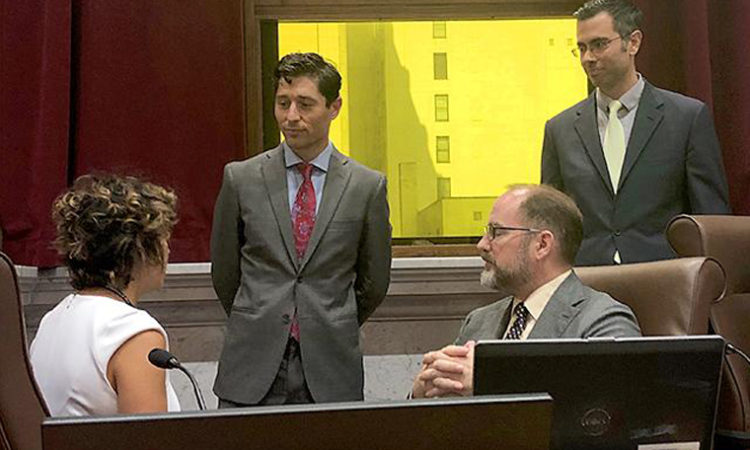 The mayor presented his 2019 budget in a 45-minute speech to about 50 people inside City Council chambers Wednesday morning.
By Jessica Lee
August 16, 2018

On Wednesday, Minneapolis Mayor Jacob Frey released his first budget. The $1.6 billion package, which calls for a slight increase to the city’s property tax levy, stays in line with most past promises by the freshman mayor — particularly regarding housing affordability.

But it reflects some changing priorities for him, too. He’s not proposing money to hire more police officers, for example, after pushing for a bigger police force earlier this year.

Here are the main takeaways from Frey’s budget, which he presented in a 45-minutespeech to about 50 people inside City Council chambers Wednesday morning. The City Council has the last say on the 2019 plan and will approve a final version in December.

More than half of Minneapolis’ residents rent their homes. Almost 9 percent of the city’s children are homeless or close to it. The population is growing at a rate unlike any in the past century.

Those type of facts, Frey said, are fueling the $40 million proposal to help more people afford homes. “While neighborhoods across Minneapolis continue to feel the benefits of a growing economy, too many people in our city are not included in that growth,”  he told the crowd. “The reality is that we can’t put affordable housing investments off till tomorrow,” because tomorrow is too late.

The money would cover a spectrum of programs to help homeowners, renters and people without permanent housing — ranging from tenant legal services to tax incentives for landlords to keep rents stable. The bulk of the money, though, would go toward what’s called the “Affordable Housing Trust Fund Program”: a pool of federal and city money set aside to help large-scale developers who want to maintain — or build more — affordable rental units pay for projects. According to Frey, a record high of 16 applicants have already asked for entry into the program so far this year, funding requests totaling $23 million.

“The good news is that people want to build affordable housing here,” Frey said. “The bad news is that this year we didn’t have the resources to support many of those requests.”

Minneapolis 2040, a long-term plan to guide the city’s development, is in the backdrop of many of Frey’s ideas in the budget. Both policy documents touch on Minneapolis’ limited housing options and aim to diversify the market, particularly with changes that allow for more multifamily housing that’s not large apartment buildings — or what the city calls the “missing middle.” The mayor’s budget includes a $500,000 pilot program to build that type of affordable housing on city-owned land near public transit, for example. City planners are set to release a final version of Minneapolis 2040 next month, which the City Council will take up before the end of the year.

Frey’s ideas on staffing the Minneapolis Police Department have evolved

When Frey ran to be a City Council member, he pushed to grow the Minneapolis police force. Then, during his mayoral campaign last year, he often emphasized the importance of officers spending time out and about in neighborhoods and that they were too overtaxed to do so. “I want to give police officers the time to engage in the community and the impetus to do so. Right now a lot of them are running from 911 call to 911 call; they don’t have time to engage,” Frey said in September.

Then, less than two months in as mayor, Frey partnered with Police Chief Medaria Arradondo to publicly advocate for hiring more officers. In a Feb. 27 story in the Star Tribune, both officials said they want to increase the department’s size from its current roster of about 900 officers going forward. They said police are stretched too thin and that’s hurting their ability to build connections in the community. 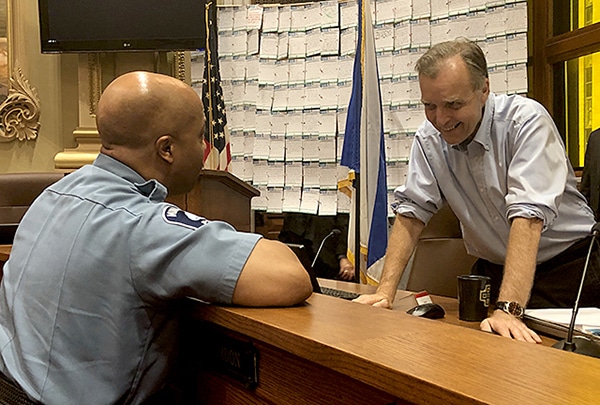 But standing at the podium Wednesday, Frey took a slightly different approach. He preached the benefits of “community-oriented” policing again, but instead of proposing new hires, he said: “We can add capacity to our department in an innovative way.” He wants to convert eight current officer positions into civilian jobs. The mayor framed the idea as a win-win since the civilian positions will benefit the department with new expertise, and the city can save about $28,000 per year for each job switch. (That’s how much more the city is paying for a sworn officer than a civilian, excluding training and insurance costs, he said.) “This proposal is good for safety by getting beat officers on the streets; it achieves a new level of expertise for our civilianized positions; and it’s good for our bottom line,” he said.

Also on the mayor’s public-safety wish list: $660,000 for a program that targets potentially violent people with intervention; $280,000 to get more officers working with mental health experts on crisis calls, and $150,000 to help officers “process what they encounter in the line of duty and recalibrate between calls.” The budget also includes money to keep the city on track with its body-camera program, among other initiatives.

North Minneapolis’ Village Trust Financial Cooperative, a black-led credit union that is set to launch next year, grew in response to the police killing of Philando Castile. Founders said they want to empower black households “to build the financial resilience of our communities, and insulate against extraction and divestment,” a news release says. They are in the process of gathering pledged deposits. And about halfway through Frey’s speech, the mayor told the crowd: “Now they have another one,” he said while holding up a check. “This, by the way, is a personal deposit for my own new account.” The crowd laughed and clapped. His budget also puts aside $500,000 for the credit union.

Frey’s address also highlighted his commitment to programs that let business owners and other professionals learn from each other; his steps to combat the city’s workforce shortages, and initiatives to lessen Minneapolis’ impact on the environment.

Though the mayor said he cut funding in some areas to help cover the new investments, the budget requires a hike to Minneapolis’ property tax levy — or the maximum amount of property tax the city collects — from 5.5 percent this year to 5.63 percent in 2019. That would mean an additional $349.9 million in revenue.

The proposal would save the “average” property owner $55 next year, if their home value didn’t increase from 2018, Frey said. He didn’t go into further details on possible savings. But someone with a home value of $249,000 (which is slightly below the city's median) would face an annual increase of about $88, or 6.7 percent, according to city estimates. A breakdown in the budget’s full PDF online (page 46) forecasts more hypothetical property tax scenarios under the plan.

This is only the beginning

The City Council will host a series of hearings to get the public’s thoughts on Frey’s ideas and seek input from department heads. Council members are likely to propose changes to his recommendations at committee meetings over the next several weeks. Then, the full council will approve a final budget plan in December.