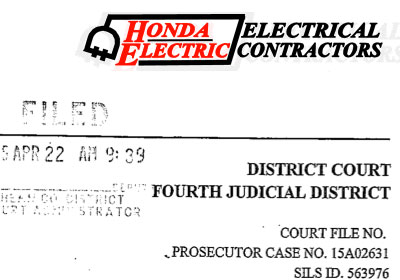 Laura Lee Plzak is charged with five counts of theft by swindle.
May 10, 2015

A business owner in Loretto is facing felony charges after shortchanging employees by $242,000 over several years.

“A few employers still want to cheat their workers out of the wages to which they are entitled,” county attorney Mike Freeman said while announcing the charges. “In this case, electricians who have to work under difficult weather and safety conditions were short-changed while trying to keep our roads safe.”

According to the criminal complaint, Plzak, who did all the bookkeeping and office work for the company, created falsified timesheets and wrongly reported hours worked on projects to the state. Jeffrey Plzak, her husband and co-owner, was sentenced to 22 months in prison for similar charges earlier this month.

The alleged crimes date back to 2010, when Honda Electric was awarded subcontract work on Interstates 35W and 694. An employee, referred to as “M.J.” in the complaint, said he was paid only $17 per hour rather than the $58.50 per hour he was supposed to get under prevailing wage laws.

Timesheets that M.J. turned in did not match the paystubs he was receiving for the work. After further investigation by the Minnesota Department of Transportation (MnDOT) and repeated requests to Honda Electric for timekeeping records, earnings statements and other descriptions of work, Plzak sent falsified documents that contained the same handwriting on each, despite supposedly coming from several different employees.

In another case, a person referred to as “D.M.” in the criminal complaint said she was paid $10 to $12 per hour, despite a wage that was supposed to be $42 per hour. When D.M. contacted Plzak to inquire about the discrepancy, Plzak confirmed she paid her that much and said, “Don’t you think that’s fair?” When D.M. said she did not find it unfair, the complaint says, “Defendant said she hoped D.M. would not stir up trouble for Defendant and her husband.”

Prevailing wage laws are under the purview of the state Department of Labor and Industry (DLI). They are intended to ensure that any construction project that involves state funding pays wages that are comparable to similar work done in the county where the project is taking place.

DLI says employers that fail to pay the prevailing wage are required to back pay the worker and can face additional penalties.

Plzak’s five felony counts carry sentences as high as 20 years in prison or $100,000. The first appearance is court hasn’t been set.