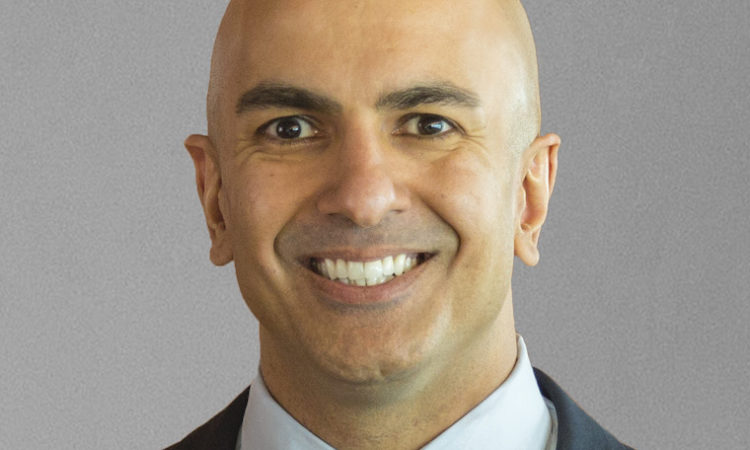 Head of the Minneapolis Federal Reserve tells TCB what actions could help avoid a deep and extended recession.
By Liz Fedor
March 21, 2020

While U.S. senators negotiate a relief package to address the economic ruin caused by the coronavirus, the Minneapolis Federal Reserve’s president and CEO said Congress should avoid worrying about precisely targeting aid.

In a Friday interview with Twin Cities Business, Neel Kashkari said, “Speed and scale here are just absolutely critical given that thousands of people are being laid off every day.”

Kashkari’s perspective is influenced by his experience overseeing the federal Troubled Assets Relief Program (TARP) during the financial crisis that triggered the Great Recession.

“One of the mistakes we made in 2008 was we tried to be targeted in our assistance to homeowners,” Kashkari said. “A lot of Americans were angry at the thought of their neighbor, who they thought was irresponsible, [would be getting] a bailout. So we tried to target it to people who needed just a little bit of help, not to somebody who bought a home they could never hope to afford.”

By fixating on who should get the relief aid, “our programs were not as effective as they should have been,” Kashkari said.

In the current environment, whole sectors of the U.S. economy have shut down or seen a dramatic fall in revenue as Americans battle the spread of the virus by staying home.

This weekend, U.S. senators are exchanging proposals on a stimulus and aid package expected to cost $1.4 trillion—the most expensive economic relief measure in American history. Republicans and Democrats differ on how the benefits should be distributed. Senate leaders hope to have a deal that’s ready for a vote Monday, and approval of the relief package would send it to the House.

“At a time of crisis, it is much better to be generous and wide ranging than to be too targeted,” Kashkari said. There is a danger when narrowing eligibility and requiring a lot of paperwork to qualify for programs, he said, because it can slow the ability of government to get assistance to individuals and businesses.

“We were always slow in the ’08 crisis and we were too timid,” Kashkari said. “We didn’t know how bad the crisis would become and we didn’t want to overreact, and that was wrong.”

In 2020, Kashkari said, the “downside scenario” would be if Americans have to “shelter in place for months.” If that were the case, he said, many millions of people would lose their jobs and the country could fall into a “deep, extended recession.”

Now, he said, is the time for Congress, the Federal Reserve and other institutions to take the bold action necessary to aid individuals, businesses and the overall economy. “We need to act very aggressively on the health care side, on the fiscal policy side, as well as on the monetary policy side to try to avoid that very deep recession,” he said.

While Congress is shaping fiscal policies in response to the coronavirus pandemic, the Federal Reserve has taken a flurry of steps in recent days to address monetary policies. “Our primary actions so far have been focused on trying to make sure that the basic financial plumbing of the U.S. economy is working,” Kashkari said. “[We want to ensure] that the U.S. Treasury market, which is the biggest, most important market in the world, continues to operate, and that the mortgage market continues to function so that credit can flow to households and to businesses.”

Kashkari has been talking to elected officials and business leaders from the Federal Reserve’s Ninth District that he leads, and also consulting with economists and policy veterans about the best government responses to the economic crisis.

He’s a big advocate of providing interest-free loans to small businesses that have less than 500 employees and forgiving the loan amount if employees are retained on the company’s payroll for a certain number of years.

“That could give them the revenue that they need to pay their expenses, pay their mortgage, pay their lease, and pay their salaries until we get through this crisis,” Kashkari said. “Keep them intact and keep their employees there. We think that is a much better way to go than pushing people onto unemployment.”

The relief package that U.S. Senate Republicans unveiled Thursday contained a small business loan provision, and it is likely that some business loan measure will pass both houses.

Kashkari maintained that a business loan program created by Congress should be administered in conjunction with local banks. “The way I would propose it would work would be you go to your local bank, they look at your financials and then they make the loan to you,” he said. “If it meets the basic requirements set out by the government, the loan is fully guaranteed by the government.”

He argued that program implementation would be quicker and more successful if the federal government partnered with private sector banks. “The advantage is you have thousands of banks across the country,” he said. “They know their local communities, they know their local businesses, and the government would pay them some fee as an incentive to go out and make these loans.”

The business loan program being developed by members of Congress would be different from a business disaster loan program announced Saturday by Minnesota Gov. Tim Walz.

Small businesses in Minnesota can apply for working capital loans of up to $2 million under the SBA’s Economic Injury Disaster Loan program. State officials said in a Saturday release that this aid is designed to “provide vital economic support to small businesses to help overcome the temporary loss of revenue they are experiencing during the pandemic.”

Some Americans may still be struggling to grasp the enormity of the economic damage caused by the spread of the coronavirus. “This is as close to an economy-wide shock as we’ve ever seen,” Kashkari said. “It’s like a natural disaster. [Hurricane] Katrina was devastating for New Orleans, but the rest of the country was unscathed. So it didn’t really make a dent in the U.S. GDP. This [coronavirus pandemic] is literally hitting the whole U.S. economy at the same time.”

The breadth of the economic destruction also is why Kashkari is so insistent on massive government aid in a rapid-fire fashion. “It’s not just restaurants, bars, coffee shops and health clubs that are shut,” he said. “I don’t know anybody buying a car right now. Homebuilding, I think, is going to take a hit. Home purchasing is going to take a hit. People are just scared, and so they are pulling back.”

Planning for business recoveries also is a huge challenge. “Until there becomes more clarity on what course the virus is going to take, is the health care system able to catch up, I think we’re going to be in this semi-frozen mode for the foreseeable future,” Kashkari said.

In the short-term, he added, it’s crucial for Congress to move quickly to get economic aid in the hands of Americans. When the Senate Republicans outlined their plan, they provided direct payments of $600 to $1,200 per person. The specific benefit amounts are being negotiated this weekend between Republicans and Democrats.

For many, Kashkari said, these are survival benefits for “helping people who are getting laid off cover their rent, cover their expenses, and pay for food until we can get the jobs going again.”

Kashkari’s advice to Congress is to construct a gigantic relief package that helps many, instead of looking for multiple ways to exclude people from receiving benefits. In responding to the coronavirus threat, he said, “Overreacting is good, underreacting is terrible,” he said.