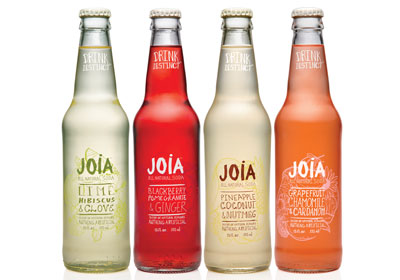 Joia All Natural premium sodas’ rapid flow from idea to a store, restaurant, and coffeehouse near you.
October 01, 2011

For years, Bob Safford—a two-decades–plus marketer whose career includes stints at General Mills, Kraft, and Fingerhut—created his own sparkling drinks for friends. In the spring of 2010, he thought: Why not turn that hobby into a business? That April, Safford left his job as chief marketing officer of Minneapolis-based jewelry company Chamilia to start Boundary Waters Brands, LLC. In June of this year, his Minneapolis-based start-up introduced the Joia All Natural brand of premium sodas.

Unlike other highly regarded soda brands such as Colorado-based Izze’s, Joia offers unique flavor combinations: grapefruit, chamomile, and cardamom; lime, hibiscus, and clove; blackberry, pomegranate, and ginger; and pineapple, coconut, and nutmeg. The flavors are interwoven so that the spices don’t dominate the palate. Joia also uses cane sugar instead of high-fructose corn syrup, and not in cavity-inducing proportions. In short, this isn’t pop: It’s soda for grownups.

In launching Boundary Waters, Safford and cofounder Carleton Johnson, a marketing industry veteran whom Safford has known since both worked at ad agency Campbell Mithun in the 1990s, believed that there were several reasons why such distinctively flavored sodas might catch on. One reason: “There’s so much going on the beverage market now,” Johnson says, with new brands appearing continually. Safford also noted the trend toward incorporating spices, herbs, and other untraditional flavors into food categories such as ice cream, chocolate and sweets, and salty snacks. Why not soda? And Boundary Waters believed that it could create something that people would actually savor. In doing market research, Safford tried dozens of small-batch, independently produced U.S. sodas. His succinct conclusion: “They were awful.”

Weeks of hunting convinced Safford and Johnson that no one was producing the kind of sodas they wanted to make. They then called on Dan Oskey, cocktail mixologist at the Strip Club restaurant in St. Paul, to help them develop recipes. They started with more than 100, narrowed them down to eight (none based on Safford’s own mixes, by the way). After a series of blind taste tests with family and friends in November, they took the six best-received recipes to a “flavor house” (a business that puts together ingredient combinations for food companies, household products manufacturers, and other clients). More taste tests followed in late January, and Boundary Waters whittled down the number of product possibilities to a final four.

The next step: concoct the marketing mix. Boundary Waters tapped Minneapolis-based Spunk Design Machine to create the branding and packaging, which Safford says imparts an “artisanal, natural, celebratory” message. But while Safford was able to get enough funding to get Boundary Waters flowing—one of the company’s board members is former Burger King CEO and Olive Garden President Brad Blum, now a Florida-based restaurateur and investor, whom Safford worked with at General Mills—he didn’t have many marketing dollars to play with. The strategy had to be, as Johnson describes it, “sample, sample, sample.”

Safford terms the Joia target market “the ‘zest for life’ consumer.” It’s a “frame of mind rather than a social demographic”—it describes customers who are “cultured, educated, and enjoy trying new things.” This is where Boundary Waters credits the Twin Cities as a notably strong market to launch a product like Joia. They’re home to a number of food co-ops and higherend independent grocers that “are very receptive to new products that are local and artisanal,” Safford says. Besides those outlets, Joia has offered samples of its sodas at cultural gatherings including the Twin Cities Fringe Festival, the Ivey awards, film festivals, and art openings at cutting-edge galleries such as the Soap Factory in Minneapolis.

The strategy appears to be working. As of late August, Joia was available in around 100 Twin Cities–area supermarkets (including Lunds, Byerly’s, and Kowalski’s), restaurants, coffee shops, and delis. Fern Weiss, purchasing manager at Minneapolis’s Wedge Co-op, wasn’t looking to add to the “ton of sodas” her store already carries. But she did, and Joia is “selling really well.” Customers like the “wonderful taste profile” as well as it being “not too sweet.”

Joia’s development from idea to launch might seem mindbendingly fast. But it reflects entrepreneurial nimbleness and focus, plus some truths about starting a beverage business. Notes Safford: “Cost barriers are fairly low, and everything can be outsourced.”