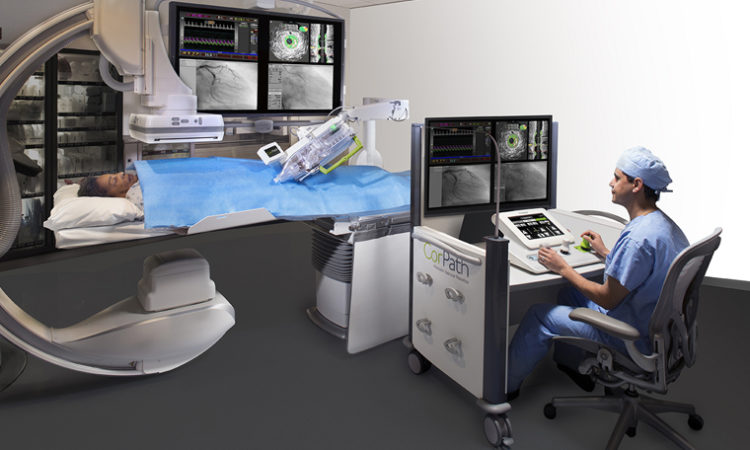 A preclinical study between Mayo and collaborator Corindus Vascular Robotics will test a remote-controlled ‘telestenting’ system in face of likely cardiologist shortfall.
By Don Jacobson
January 10, 2018

With growing shortages of cardiologists and other physicians expected in the coming years, health providers are turning to various forms of telemedicine to deal with the workforce gaps. One of those methods is robot-performed coronary intervention procedures in which doctors working at a remote location can guide a robotic arm in the placing of heart stents.

Now the Mayo Clinic, which in recent years has emerged as a national leader in telemedicine, is tapping a $3.3 million charitable grant to collaborate with a Massachusetts-based maker of such robotic equipment to carry out a preclinical study on use of “telestenting.”

According to federal health officials, there’s no question of a looming shortage of physicians of all stripes in the coming years as the U.S. population ages and more people have access to insurance. In December 2016, the U.S. Health Resources and Services Administration released findings that by 2025, assuming there are no changes in how medicine is delivered, there will be significant workforce shortages of physicians in many specialties of internal medicine.

That includes a deficit of more than 7,000 cardiologists nationwide.

Mayo, meanwhile, has shown significant interest in telemedicine as a way of dealing with the supply-demand imbalance. In 2016, for example, it announced it was expanding its emergency telemedicine practice to the more than 45 hospitals across nine states. The system enables a remotely-located Mayo specialist to connect with local care teams to assess, diagnose and treat patients.

But in its new collaboration with Corindus Vascular Robotics (NYSE: CVRS) of Waltham, Massachusetts, Mayo is taking the telemedicine concept to a new level – a technology enabling physicians to perform minimally-invasive “percutaneous coronary interventions,” such as inserting stents, via remote control.

The funding for the effort was provided by the Leona M. and Harry B. Helmsley Charitable Trust.

Corindus CEO Mark Toland said in a statement that percutaneous coronary interventions, or PCI, were only the beginning of what the company is envisioning for its remotely-operated robotic medical system.

“We are delighted to work on critical research for remote robotics with Mayo Clinic,” he said, adding that “while PCI is the initial focus for this development program, our long-term goal is to extend this capability to the remote treatment of endovascular disease and stroke.

“Corindus is committed to developing a high tech cardiovascular model that improves efficiency, integrates the latest technology, and ultimately improves patient care. Telestenting is at the core of this strategy.”

The company last year completed a $45 million private placement led by BioStar Ventures, to be used in part to commercialize the CorPath system following its October 2016 approval by the U.S. Food and Drug Administration. Corundus, which reported $2.4 million in revenue during the third quarter of 2017, claims an installed base of 23 CorPath systems, mainly in the United States.