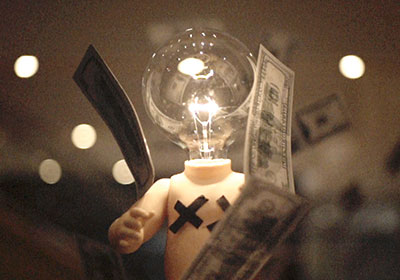 Why is a global ad agency trying to raise money for tiny ventures?
April 01, 2014

When Marty Wetherall of Fallon walks into Travail, one would think he would get the rock-star treatment. He helped the restaurant raise more than a quarter-million dollars in a Kickstarter campaign. The place should name a dessert after him.

Actually, Wetherall might have already received his icing on the cake. Through the experience the agency gained with its work with Travail—the campaign raised $255,000, far more than the $75,000 the restaurant had targeted to fund its Robbinsdale expansion—it found a new business niche: the Kickstarter Starter Kit.

Applicants are asked to fill out a one-page questionnaire describing their project. If Fallon is interested it will pull together the elements of a campaign, which likely will include a web video, crucial in the land of Kickstarter.

The Travail campaign’s success surprised many, but those folks didn’t realize it had the production savvy of Fallon behind it. Fallon’s video featured one of Travail’s chefs chugging a beer, another dangling food in front of a customer. It was engaging and irreverent, and something amateurs likely couldn’t have pulled off.

“We had shot some footage but realized we needed more finesse,” says Megan Leafblad, director of business and development for Travail. “Marty and his team were great about coaching the guys. We met with them over about a month, and they shot it in a day.”

And the best thing for Travail was the cost: Nothing. From free advertising came free money.

“We had a personal relationship with them, and I think they approached it as something to learn from. We didn’t sign a contract or anything,” Leafblad says, noting that the restaurant has offered Fallon trade in return.

Going forward Fallon is hoping for more than free food.

“It’s a success-based compensation model,” says Wetherall, who is Fallon’s director of innovation. “Say you have a hardware idea that is using crowd-funding as a pre-sale mechanism. We could take a percentage off the overall [funds raised]. . . . We could talk about a relationship that lasts past the campaign. It will be case by case. What we’re committed to are no up-front fees.”