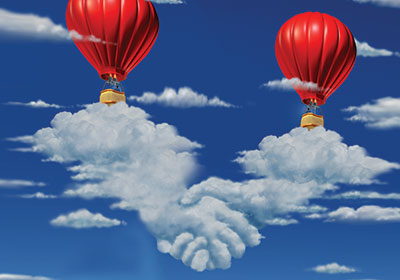 Businesses will be looking to make some deals in the year ahead.
March 03, 2014

As the economy continues its protracted recovery, deal watchers are expecting to see an uptick in mergers and acquisitions activity in 2014. But the gains are likely to be modest. No one is forecasting a return to the go-go days of 2007, a high-water mark for transactions before the economy hit the wall in the fall of 2008.

“The fundamentals are reasonably strong right now, but that doesn’t mean that we’re all of a sudden going back to the heyday of M&A. We’re sort of in a new norm for M&A,” says David Gale, a partner in the Transaction Advisory Services department of the Minneapolis office of Ernst & Young. “There probably has been a bit of a fundamental reset in the M&A market. … 2007 was not a norm.”

Gale notes that too many market observers get caught up in drawing comparisons to deal volume of 2007, an off-the-charts year that’s not a reasonable barometer for comparisons.

“There may be a modest uptick in deal activity [in 2014]. The increase on M&A activity is going to hinge on some signs of improvement in the overall economy.”

Bruce Engler, a partner in the Minneapolis office of Faegre Baker Daniels, heads the law firm’s M&A practice, and has done M&A work for 34 years. “I think 2013 was still a bit choppy and didn’t live up to expectations,” he says. “I think this year is going to be very good. I’m very optimistic about this year.”

Capital looking for a place to go

“It was two American icons coming together,” Engler says.

One factor that could help drive future deals: a surplus of cash sitting on corporate balance sheets. Private equity players are also looking to get money off the sidelines.

“Private equity firms have a lot of capital available and they’re anxious to put it to work, so that’s a very favorable factor. I think something needs to push the sellers off the sidelines. The valuations are very attractive for deals that are getting done,” Engler says. “I think that the market is going to be strong overall.”

Looking ahead, Engler sees the outlook for the economy improving.

“I’ve been surprised that the market hasn’t been stronger the last couple of years. The economy has been moving in fits and starts,” says Engler. “I sense that a lot of that is getting resolved going into this year.”

At the end of 2013, Bloomington-based Cushman & Wakefield/NorthMarq, a commercial real estate services firm, closed a deal that substantially expands the company’s national footprint. On December 31, the company acquired the Salt Lake City, Utah-based Commerce Real Estate Solutions, which has offices in many western cities including Las Vegas. Cushman & Wakefield/NorthMarq representatives declined to disclose the value of the deal, but it boosts the company’s size to approximately 750 employees, a 50 percent increase.

“The strength of Commerce is their brokerage capabilities. These are attractive new markets to us… these are fast-growing markets,” says Jeff Eaton, president of Cushman & Wakefield/NorthMarq. “It diversifies our base beyond the Twin Cities.”

The combined firm will have annual revenue topping $100 million and will manage more than 50 million square feet of commercial property. Commerce’s offices will continue to operate under their own name.

The move was driven in part by trends in the commercial real estate industry, which is increasingly dominated by large companies that have a national and international reach. Eaton says that his company has taken several steps to build its brand and grow nationally in recent years, starting with its reorganization in 2008.

“The market certainly has spoken,” Eaton says. “That’s why we decided to go down this path in 2008.”

The company had long operated under the United Properties banner until 2008, when it reorganized its brokerage and property management services under the NorthMarq name. The related United Properties now focuses on real estate development and investment. (Both companies are part of NorthMarq Co., which is owned by the Minneapolis-based Pohlad Family Cos.)

In 2009, NorthMarq expanded with the acquisition of the property management business of the then-struggling Opus Corp. Then in 2011, the company struck a unique joint venture deal with New York-based Cushman & Wakefield, a global real estate player.

“We are always looking at deals,” Eaton says. “We continue to look to grow.”

In the wake of the latest deal, Cushman & Wakefield/NorthMarq now has offices in about 20 cities.

But the company is selective in choosing partners for expansion.

“The most important thing that you have to believe is that there’s going to be a cultural fit. It’s absolutely critical,” Eaton says. “It’s the trickiest part. It’s easy to underwrite numbers. It’s harder to underwrite culture.”

Eaton says that before doing the deal, his group did due diligence on details that don’t show up in financial statements. That meant looking at the tenure and turnover of employees and clients. They found that many brokers had been with Commerce for years.

At the beginning of this year, Minneapolis-based accounting, outsourcing and wealth advisory firm CliftonLarsonAllen announced the acquisition of three separate, smaller firms in Maryland and Massachusetts.

For Gordy Viere, CEO of CliftonLarsonAllen, the deals are just the latest part of a plan that the firm outlined in the early 1990s, when it just had offices in Minnesota.

“We were a Minnesota firm only. That’s when we laid out the strategy that we would be a national firm in 25 to 40 years,” says Viere, who says that the company takes an “organized and methodical” approach to deals. Viere has been with the firm since 1975 and has served as its CEO since 1989.

CliftonLarsonAllen does not disclose the acquisition price of its deals, but Viere notes that most deals are typically financed through the firm’s own cash flow or are financed by the seller.

“We will continue to do acquisitions into the future,” says Viere, who says that he expects that CliftonLarsonAllen will make three to eight acquisitions of smaller firms per year.

Another local company took a personal approach to courting competitors who might be interested in selling. Dan Ferrise, CEO of Eagan-based Miller Manufacturing Co., says that to stay focused his company has a straightforward, one-page business plan.

“The more goals you have, the less likely you are to accomplish any of them,” Ferrise says.

But the plan called for making an acquisition to drive growth. This past summer, Ferrise sent personal, confidential letters to the leaders of 13 competitors.

“What I wanted was a letter that wouldn’t end up in the garbage,” Ferrise recalls.

Every letter drew a response, and Miller Manufacturing ultimately signed nondisclosure agreements with four companies. At the end of August, Miller had a signed letter of intent to acquire Allied Precision Industries Inc. of Elburn, Ill. The deal closed in early January. Miller Manufacturing makes farm, ranch and pet products for the hobby farm market.

Ferrise declines to disclose the terms of the all-cash deal, but he notes that it will add about 30 employees to Miller, which already has approximately 170 employees. He adds that the company is looking to expand its 310,000-square-foot plant in Glencoe by an additional 60,000 square feet.

Most experts agree that in the current climate, companies are being much more careful before leaping to acquire another company.

“Nobody should really just expand for expansion’s sake, unless there’s a return at the end of the day,” says Jim Orlin, an advisory partner in the Chicago office of KPMG LLP. Orlin works with clients throughout the Midwest. “The last four or five years people have been much more judicious about their acquisitions.”

John Potter, a partner with the Minneapolis office of PricewaterhouseCoopers, says that the tendency for people to look back fondly at the peak year of 2007 obscures the fact that M&A activity has been stable for a while.

Potter thinks that the first quarter of 2014 is off to a strong start for deal activity. He notes that given the relatively modest pace of economic growth, many businesses will need to look to acquire other companies to drive new growth.

“We’ve spent four years growing bottom lines,” Potter says. “But the revenue lines have not grown. The focus I think that’s driving a lot of M&A now is on driving top-line growth. The economy’s growing at 2, 3 percent. You can’t rely on GDP growth to drive your revenue growth.”

At the same time, the changing technological landscape is also prompting business combinations that once would have been seen as unlikely, Potter says.

Perhaps most importantly, Potter sees business leaders with more faith that the future looks brighter. That confidence can help drive new acquisitions: “There’s a greater confidence in the forward earnings than there was a year ago.”

As he looks at the deals in the pipeline, Potter is bullish for the year ahead: “2014 is starting out very strong.” 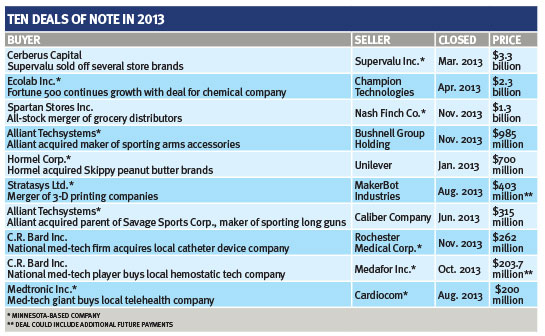