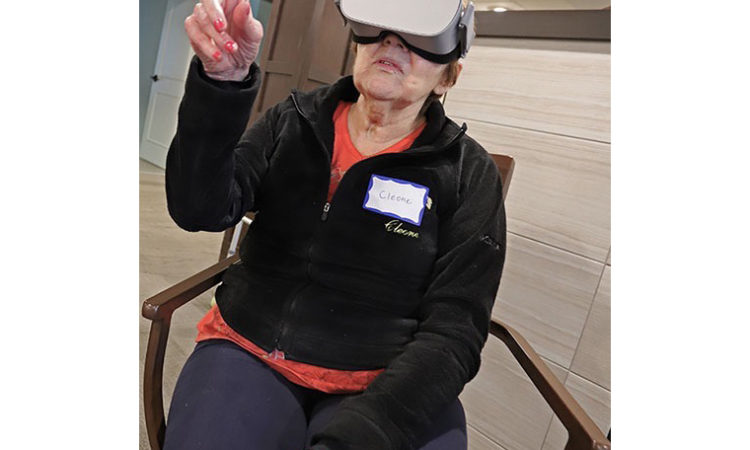 A Shorewood Landing resident testing out the WellnessVR. (Photo courtesy of WellnessVR)

The firm is partnering with Minneapolis-based virtual reality company Visual to introduce VR tech at Shorewood Landing, White Bear Heights, and Highlands of Saint Paul. The facilities’ residents will gain access to Visual’s signature WellnessVR platform, which is designed to reduce stress and promote wellbeing. The facilities house more than 300 adults in total.

“We are always looking ahead to find ways to enhance the lives of the residents in our senior communities,” said Blake Hastings, Oppidan President and a TCB Person to Know in 2019, in a statement. “Adding WellnessVR programming for all residents in our independent living, assisted living and memory care will do just that.”

The WellnessVR platform offers seniors an opportunity to enjoy a variety of 360 virtual experiences, including a summer day by Lake Superior, a trip across the world, joining performers on stage during a Minnesota Opera show, and other arts and culture adventures. The scenes were developed for the seniors in partnership with related real-life entities the Minnesota Opera, Minnesota Museum of American Art, and Minnesota Public Radio.

A study conducted by WellnessVR with Ebenezer Senior Living’s Minneapolis Campus, found that by providing these experiences, Wellness VR effectively improves seniors’ lives across the board.

“WellnessVR is a proven solution that offers seniors a mindful reset,” said Chuck Olsen, Visual CEO and co-founder, in a press release. “It’s calming [and] easy to use…Plus, it’s an added bonus that these seniors will benefit from technology that will make their grandkids jealous.”

The partnership with Visual—which the release states is the first of its kind for WellnessVR—is Oppidan’s latest effort to boost offerings to seniors in its properties.

In 2016, the company launched the Pillars Fund, which provides programming around music, art, writing, storytelling, and other therapies intended to help individuals with dementia and Alzheimer’s disease. To date, the company has pledged $500,000 for the program.

WellnessVR rolled out this month at Shorewood Landing, and will be introduced at White Bear Heights and Highlands of Saint Paul sometime in the coming months.