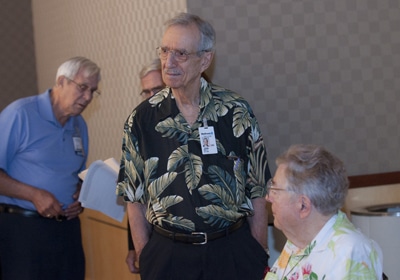 Although the humble Minnesotan may be reluctant to admit it, Bravis’ contributions helped save thousands of lives and launch the largest medtech company in the world.
By Sam Schaust
February 09, 2017

Bravis died earlier this month at age 90. But he left behind a legacy as the company’s first full-time hire outside of its founders and was a crucial actor in saving the fledgling startup that would eventually become the world’s largest medtech firm.

He was hired on at the company as a general service technician in 1949, when all the work was done out of a garage in Columbia Heights. Bakken and Hermundslie had great aspirations—but they needed someone to do mundane repairs. Bravis had just graduated from the National Radio School and helped install Minneapolis-based WDGY Radio’s 50,000-watt transmitter. It was then he was recommended as a potential employee.

“A number of the employees that Earl [Bakken] hired were identified through families, friends and church,” said David Rhees Ph.D, a historian of medical technology and former director of the Bakken Museum. “In John’s particular case, he had a friend who was a cousin of Earl’s who told John that Earl had built a mechanical man.”

In an interview for the Bakken Museum from 2011, Bravis recalled hearing of Bakken’s interest in the 1931 film “Frankenstein” and how it inspired Bakken to build a robotic machine with arms and legs that could walk and, according to Rhees, even smoke cigarettes.

Bravis was intrigued and eventually visited the Medtronic garage.

“Earl was sitting with his back to me working on some equipment and Palmer met me at the door,” Bravis recalled in the Bakken Museum interview. “I guess there were a couple of broadcast engineers that would come in once in a while and do some servicing but nothing steady. So they really needed somebody that would be there all the time and Earl wanted to be relieved of that particular duty.”

“On a typical day, Earl would come by and give me a schematic drawn on a grocery bag,” Bravis said. In 1957, one of those schematics was a revised draft for one of the most significant inventions to ever come out of Minnesota: the world’s first external, battery powered pacemaker.

The first prototype required “a whole cart full of equipment,” including a rechargeable car battery, and left Bakken feeling unsatisfied. Upon going back to the drawing board, Bakken simplified the design, basing it off the inner workings of an electronic metronome circuit he had seen detailed in the April 1956 issue of Popular Electronics magazine.

The plans for the new device were then handed off to Bravis, who built the circuitry and machinery of the device all in one day. “And it worked right off,” according to Bravis.

Despite the medical breakthrough, Medtronic was struggling financially. “I worked there for five years without a raise because there just wasn’t enough money,” Bravis said. “I remember the fifth year I said I’m willing to cut down my hours a little bit to help out paying bills.”

Bakken and Hermundslie opted against this and instead took a $1,000 loan from Bravis at a 6 percent interest rate.

“I think of that now,” Bravis told the Bakken Museum. “If I would have had stock—just keep the money and give me the stock—I’d be pulling up in a Rolls Royce.”

Medtronic’s financial situation eventually improved as demand for Medtronic’s products and services grew. The company that made $8 in its first month just reported nearly $29 billion in annual revenue for 2016. The company is still a dominant player in pacemakers, where it controls about 40 percent of the market. From humble beginnings through to the late 1980s, Bravis stuck by Bakken’s side.

“He was Earl’s right hand man and was involved in a lot of projects,” Rhees said.

At the peak, Bravis claimed he had as many as 70 people and four managers reporting to him. “But I had never once been given a new title,” he said.

In 1987, Bravis retired from Medtronic. Much of his retirement was spent indulging in one of his greatest passions: playing saxophone. For more than 60 years, Bravis frequented Twin Cities jazz establishments and played as a member of The Chamberlain Big Band Orchestra.

Before his engineering career took off, Bravis had been a music major at the Minneapolis School of Music.

Throughout his life, Bravis remained a Columbia Heights resident, living less than three miles from the original Medtronic garage.

In 2016, Bravis suffered from heart failure. Doctors implanted a pacemaker, the very device he helped create, in his chest and, according to his daughter Julie, “he responded extremely well.”

Unfortunately, other health issues arose and Bravis passed away on January 2, 2017 of complications from bladder cancer.

Rhees, who had known Bravis for many years, remembered him as “a very modest, quiet man who was integral to the success of Medtronic in its early days,” as well as later on.

“He typified your modest Minnesotan engineer who doesn’t brag about his contributions and didn’t get that much publicity for them,” Rhees added. “You look back and if Earl and Palmer didn’t have people like John Bravis in that garage, it would have been very hard for that company to be successful.”