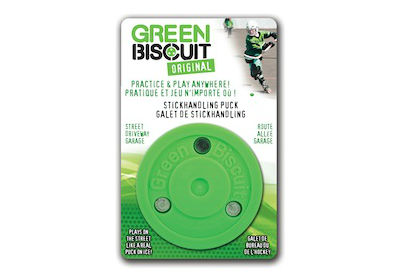 The Bloomington-based Green Biscuit brand is a finalist in the “Get On The Shelf” contest and is competing for the opportunity to appear on the retailer’s website and in stores.
October 19, 2013

A local entrepreneur who created a hockey puck for use on non-ice surfaces is among the inventors vying to have their products appear on Wal-Mart Stores, Inc.'s website, and potentially on the mass retailer's store shelves.

The “Get On The Shelf” contest consists of five categories: “Made in America” (featuring products made in the United States), “Great Gadgets” (products with a technologically-advanced edge), “Kids’ Stuff” (designed especially for kids), “Around the House” (to aid in household tasks), and “Live Better” (to support a healthy and safe lifestyle).

Former National Hockey League player Tom Pederson, whose Green Biscuit company is based in Bloomington, was recently named a finalist for his off-the-ice hockey puck design. The Green Biscuit puck has a two-piece design featuring three rubber washers between the two halves, which act as shock absorbers, allowing the puck to travel over rough surfaces. The product is competing with three other contestants in the contest’s “Kids’ Stuff” category.

“Sports is a great category for Walmart.com—we sell a lot of products in this category,” a Wal-Mart representative said regarding Pederson’s product.

“It would mean the world to me and Green Biscuit to be in a national retailer like Wal-Mart,” Pederson said in a statement. “For one, it really validates what I am doing, my passion for the sport, and these amazing products.”

Other products in the “Kids’ Stuff” category include an electronically-wired dollhouse building kit, a customizable wristband, and interactive pajamas that allow the user to access bedtime stories by using a mobile device to scan dots on the clothing. A bracelet that erases, a multi-functional pot and pan lid, and a dog wheelchair are examples of products in other categories.

Wal-Mart spokesman Ravi Jariwala told Twin Cities Business that the Get On The Shelf contest allows the Bentonville, Arkansas-based company to discover new products that fill gaps in its existing product base.

The contest is also a launching platform for entrepreneurs seeking broader product exposure and distribution, he said.

Applicants had until the end of July to submit product ideas for the Get On The Shelf contest. At that point, visitors to Wal-Mart’s website viewed more than 1,000 submitted items and voted on their favorites, narrowing the products down to 20 finalists.

The contest includes a series of online videos featuring the 20 finalists and their products. Wal-Mart filmed a “webisode” for each category, which appear online weekly until October 22. After the webisode airs, viewers have 72 hours to vote for their favorite product within the specific category.

Five winners (one from each category) with the most votes will be named at the end of October and will then compete for the chance to sell their products on Wal-Mart’s website and in stores.

Wal-Mart will set up a “pre-order” option online for each of the five winners, and the product that receives the highest number of customer pre-orders will be named the grand prize winner.

The grand prize winner, to be announced in early- to mid-November, will then receive marketing support from Walmart.com and an introduction to the Wal-Mart stores’ merchandising team, which could then decide whether to sell the winning product in Wal-Mart stores.

Jariwala said that Wal-Mart seeks products that are innovative and largely appealing to the public when considering ideal Get On The Shelf candidates.

Voters can see the finalists’ products and watch the webisodes at getontheshelf.walmart.com.

While a recent study suggested that Minnesota isn’t home to a particularly strong concentration of entrepreneurially-minded individuals, there are many signs that the state has a strong start-up scene. For example, the state remains a national leader through its number of patents. Additionally, Minnesota has drawn the attention of Google, Inc., which has sponsored Minneapolis entrepreneurship events and praised the local start-up culture.