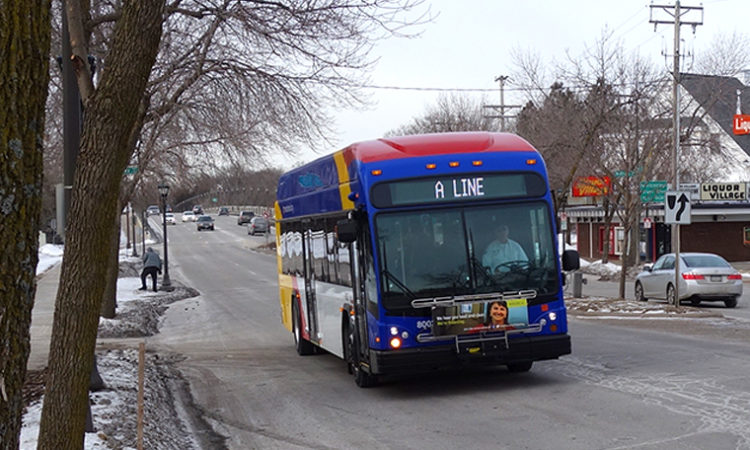 Those in the seven-county metro area would face a sales tax increaseâon top of a 20-cent gas tax increase statewideâif the $324 million transportation package were adopted. ( Photo by Peter Callaghan)

The additions, of course, would come at a cost. Those in the seven-county metro area (Hennepin, Ramsey, Anoka, Washington, Dakota, Scott, Carver) would face an eighth-of-a-cent sales tax increase — on top of the budget’s 20-cent gas tax increase statewide — if the governor’s $324 million transportation package were adopted. Over the next few months, state legislators will decide just how much the state will spend on public transit in the coming biennium.

Still, transportation leaders in the metro area are counting Tuesday’s announcement as a win. It comes at a critical point for the Metropolitan Council, the regional planning body, and one of its core divisions: Metro Transit. Both are aggressively touting massive projects — including the upcoming Southwest light rail and a new bus rapid transit line between Minneapolis and Burnsville (the Orange Line) — as key to solving the region’s equity and housing issues. Both are also grappling with the same problems: declining ridership totals and a budget deficit for the region’s bus system. And both have new leaders.

“Bus is the workhorse of the system,” said Metro Transit’s new general manager, Wes Kooistra, in an interview last week. “Part of the solution here is to find sustainable and reliable funding sources … How do we maintain the services we have? How do we maintain our services in a good state of repair? … And we’re making decisions between issues of service frequency and state of repair and long-term asset management because we don’t have enough funds to support the current system.”

Bus ridership down across metro

And though the Met Council has managed to address some of the shortfall with one-time investments, without a different approach the system will “continue to fall behind peer regions,” notes Walz’s budget proposal.

To avoid that, Walz is proposing changes to how the state pays for federally-mandated transit services for seniors and people with disabilities, Metro Mobility. Currently, the service receives money via big transportation packages. Instead, state leaders want to give the program its own budget line. That way, buses would not have to compete with Metro Mobility in the transit funding pool, especially since the service is growing more expensive each year.

“I think that people are starting to understand that investment in buses is worthwhile,” Kooistra said, adding that bus riders account for about 70 percent of the agency’s customer base between bus and light-rail.

The Met Council has already taken steps to expand bus rapid-transit, routes that make limited stops and aim to provide faster rides over longer distances. But Walz’s proposal calls for the system to eventually have 10 such lines across the Twin Cities — an idea Kooistra said would grow the agency’s ridership substantially. The governor also wants a slight funding increase for the bus system’s regular service and money to add 150 new electric buses.

All in all, the ideas aim to boost transit ridership over the next decade by giving passengers a better experience on both buses and light rail. That could also mean better bus shelters and different signal timing.

They come after figures were released last week that show slight declines in ridership of all kinds of regional transit — from the University of Minnesota’s campus shuttle to MVTA in the suburbs — each year since 2015. Met Council leaders cited a range of possible reasons for why less people are choosing bus transit — including a system-wide fare increase in Oct. 2017, a bus-driver shortage and “lower-than-usual” gas prices.

“Ridership is possibly down, in part, because in the past we have divested in poor performing routes, which we should do … and then using that money to invest in higher performing routes,” said Kooistra. “We have been doing the divesting, but we haven’t been doing the investing. So, no wonder ridership is lagging on the bus system when we don’t have the money that we need to invest in truly promising service.”

Not all public transit showed decreased ridership, though: The region’s first bus-rapid-transit line (the A Line), between southwest Minneapolis and the Rosedale Center, which launched in 2016, saw growth in passengers. And light rail ridership also continues to go up. (The Green Line marked 13.8 million rides in 2018 — 5 percent more than 2017. And the Blue Line recorded more than 11 million rides — 3.9 percent more than the year prior.)

How Walz’s transit proposals came to be

Shortly after his election last fall, Walz  announced picks for his cabinet, the 24-member group that leads state agencies. For chair of the Met Council, Walz tapped Nora Slawik, who had served seven terms in the state House as a Democrat before her most recent job, mayor of Maplewood.

Soon after her swearing-in ceremony in early January, Slawik picked Kooistra to lead Metro Transit. He had previously served as the council’s regional administrator — which oversees day-to-day operations, including Metro Transit — and as its chief financial officer. The council chair also promoted a former aid to the governor, Meredith Vadis, to fill Kooistra’s former position as regional administrator. 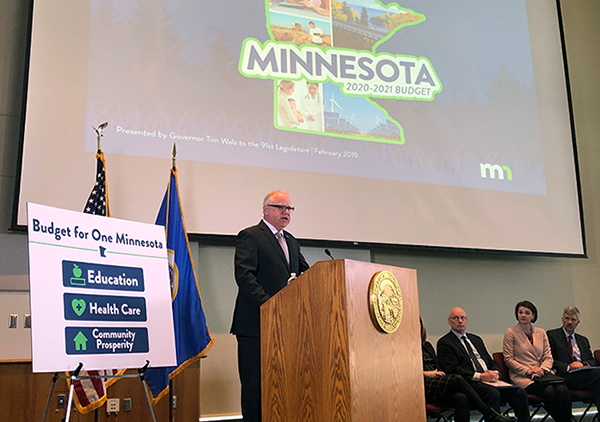 Gov. Tim Walz said his proposal for a 20-cent-per-gallon gas-tax hike would roll out over two years and generate new money not only for transit, but also for road and bridge repairs and safety improvements. (Photo by Jessica Lee/MinnPost)

In an interview, Slawik said she and the other cabinet members meet with the governor frequently. She said she hired Kooistra as Metro Transit’s general manager, one of the state’s highest-paid public positions, because he understood the administration’s vision for transportation.

Kooistra succeeds Brian Lamb, who led the Department of Administration in the early 2000s under then-Gov. Tim Pawlenty before being tapped to run Metro Transit. There he helped shepherd plans for the Green Line light rail, launched in 2014, as well as the ALine. Ridership totals soared to their highest levels in a generation, and in 2016 the American Public Transportation Association named Metro Transit “System of the Year.”

Walz announced his budget proposal to a conference room full of reporters and staff at the state Department of Revenue Tuesday. In his speech, he said his proposal for a 20-cent-per-gallon gas-tax hike would roll out over two years and generate new money for road and bridge repairs and safety improvements. All together, the governor’s proposed tax hikes, which also include increases to vehicle sales taxes and registration fees, would bring in $11 billion for transportation over 10 years.

Slawik also said she is pleased with the governor’s ideas, and she plans to try to generate support among as many legislators and business leaders as possible.

“We want to be in a position where we can decide between what innovation we want to do next. That’s the dream,” Kooistra said.