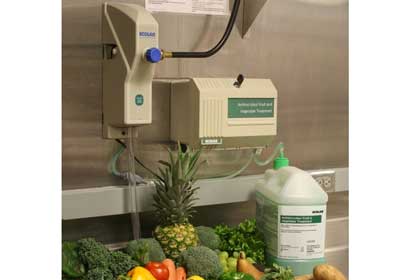 The company said its Antimicrobial Fruit and Vegetable Treatment product can kill 99.9 percent of salmonella, listeria, and E. coli found in produce wash water.
May 24, 2013

St. Paul-based Ecolab, Inc., said Monday that it has introduced a new product for restaurant operators that is meant to reduce the risk of foodborne illness being spread by insufficiently washed produce.

Citing a U.S. Centers for Disease Control and Prevention study, Ecolab said that lettuce and other leafy green vegetables are the largest source of foodborne illnesses in the United States. Ecolab’s new system, which is called Antimicrobial Fruit and Vegetable Treatment, can kill 99.9 percent of salmonella, listeria, and E. coli found in produce wash water, the company said.

The new product is dispensed from an Ecolab system, and a single sinkful can be used to clean up to 200 pounds of fresh fruits and vegetables, the company said. And it’s not necessary to rinse the produce after using the treatment, according to Ecolab.

The company also said that cleaning produce with its new product has other advantages: “It enhances the appearance of produce, reduces bacteria that cause spoilage, and leaves no smell or aftertaste,” Kris Kielsa, vice president of marketing for Ecolab’s institutional division, said in a statement.

The new product will be unveiled Saturday at the annual National Restaurant Association Show in Chicago, and it adds to Ecolab’s portfolio of products focused on food safety and cleanliness.

Ecolab introduced a similar product a few years ago, although the Antimicrobial Fruit and Vegetable Treatment represents an upgrade in several ways, according to spokesman Roman Blahoski. For example, the new product includes a controlled dispensing mechanism, is registered with the Environmental Protection Agency, and gained U.S. Food and Drug Administration clearance. It is part of the company’s global institutional business, which accounted for about 31 percent of pro forma 2012 sales.

Ecolab is among Minnesota’s 15 largest public companies based on revenue, which totaled $11.8 billion in 2012. It serves customers in the food, health care, energy, hospitality, commercial laundry, and industrial markets in more than 170 countries. It recently completed its $2.3 billion acquisition of Champion Technologies.