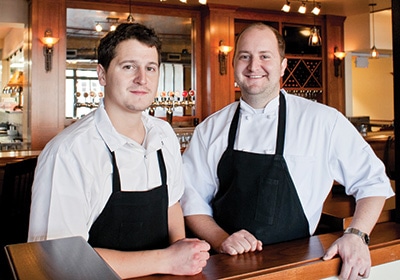 In an era of attitude-heavy restaurant openings—joints with complex fare at in-your-face settings, Lake & Irving is a pleasant respite, a casual chef-driven neighborhood spot with ambition and hospitality. A place that seems to exist to satisfy not a chef’s yearnings, but a neighborhood’s.

The name is the location, between Uptown and Lake Calhoun, but without the parking hassles and rooftops full of drunks. The approach is American eclectic, with Hawaiian overtones. Why? Because chef and co-owner Chris Ikeda spent most of the last decade in the 50th state, mastering its amalgam of American and Japanese fare along with typical South Pacific influences. But don’t roll your eyes, because it simply translates to winning takes on dishes like fried chicken and pulled pork.

Ikeda and brother Andrew, the other owner and also a chef, returned to their native Minnesota to do their own thing. The eclectic fare ranges from good to great. From the small plates menu, don’t miss smoked walleye rillettes, a thoroughly local take on a French classic—smoked fish spread served with crostini, pickled onions and mustard. Furikake chicken—nuggets of chicken thigh, breaded and glazed—adds Japanese seasonings to create a true crowd-pleaser. Less addictive but equally delicious are the tempura-battered slices of portobello mushroom served with an emphatic black garlic aioli.

A space that’s rather generic

Main courses include a salmon quinoa Greek salad that, though tasty, reminded me of a similar grocery deli version. A delicate crab-crusted snapper in a soy-mustard beurre blanc proves a kitchen that traffics in big flavors can also do subtle.

But it’s the sandwiches that are the menu’s center of gravity. A cheeseburger made with Pat LaFrieda beef and a Patisserie 46 brioche could not have been beefier or more craveable, while the buttermilk fried chicken sandwich with pepper jack and local bacon is sports-bar fare elevated to its apotheosis. Kalua pork—the Hawaiian riff on pulled pork—smoked in banana leaves, is mild and modest, but a winning package of flavors nonetheless, with onion strings and pineapple slaw. Finally, a Washington, D.C.-style “half-smoke” sausage on a Boston-style bun is simple goodness, unfortunately overwhelmed by an ungainly chunk of braised meat masquerading as chili. Fries are up to snuff, as are now-ubiquitous fried brussels sprouts, doused with a bit of olive oil, soy, and togarashi pepper.

Dessert isn’t an emphasis; no surprise that the only genuine disappointment were slivers of dry pound cake with too much almond frosting and not enough yuzu marmalade.

Service is friendly and knowledgeable, and it’s easy to find immediate seating, though I’m sure the word will get out. L&I’s space, in the former Blue Sky Creamery, is pleasant but rather characterless. There’s lots of wood and a lot of institutional flooring, but nothing to tie it all together.