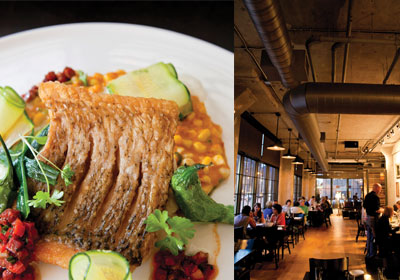 Borough is the latest addition to the strip of restaurants lining Washington Avenue in the North Loop, but it is closer to a yearling than a newbie. It’s a smooth and professional operation, though thoroughly informal in every respect except what’s on your plate. It’s got a great industrial feel befitting the neighborhood: lots of exposed concrete, big windows, some wood and tile finishes, but little to compete with the food. The space is loud, but not overwhelmingly so. I especially liked the warm bar area, off the main dining room. The patio borders on picturesque, though you’ll have to wait for spring.

Borough is helmed by two Travail alums, Tyler Shipton and Nick O’Leary, though their output is a bit more mannered than that of their alma mater. Most dishes carry out a theme, around which a bunch of deconstructed tastes revolve. Dots of sauces and flavors are spread over the rectangular plates, and it can be difficult to tell from the menu which items dominate and which are mere embellishments.

Obsessive deconstruction, a bias toward style over substance.

Borough’s is an accomplished but showy form of cooking. The technique and plating are impressive, but come here looking for a “dining experience,” not a simple meal. (Service is smart and unobtrusive, by the way. You’re never rushed or talked down to.) The food requires attention, and by the end of a multi-course seating, it’s rather exhausting, especially because the desserts reach the apotheosis of all that’s challenging about Borough, delivering more visual impact than satisfaction.

Oddly, what I remember most was a pad Thai-ish concoction of rice noodles, fried tofu, green onion, an egg, and (too much) peanut sauce, which stood out because it was the only dish I was served that could be eaten without parsing.

Twenty years ago, a restaurant like Borough would have been pigeonholed as a special-occasion restaurant, serving fancy food at rather fancy prices. But the current vogue is to mix elaborate cooking with the trappings of a casual restaurant. I respect the effort that goes into Borough’s cuisine, but deconstruction, much like sous-vide cooking and molecular gastronomy, seems to be more a piece of culinary fashion than a genuine innovation in how we eat. TCB