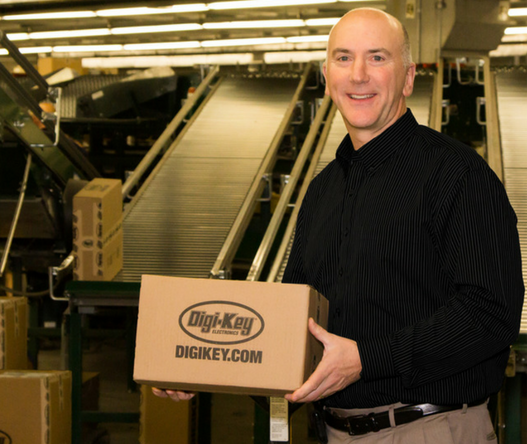 Dave Doherty, president and COO of Digi-Key Electronics, poses with the order that pushed the company above the $2 billion mark. ( Photo by Digi-Key)

Digi-Key Eclipses $2B in Annual Sales for First Time Ever

The e-commerce company has already passed its prior year’s revenue ($1.84 billion) with a month and a half still left in the year.
By Sam Schaust
November 09, 2017

Dave Doherty, the president and chief operating officer of the Thief River Falls-based company, took a picture (shown above) with the order that pushed Digi-Key over the $2 billion mark for the year.

“It took us 38 years to reach $1 billion in annual sales and only seven short years to reach the second billion,” Doherty said in a statement, in which he also thanked Digi-Key’s more than 650 suppliers and 3,500-plus employees.

Comparably, in its last fiscal year, Digi-Key reported $1.84 billion in sales. And the company is showing no signs of letting up as it recently kicked of a massive expansion effort involving a new, one-million-square-foot distribution center that, once complete, will create a need for 1,000 more workers.

This month, Twin Cities Business analyzed arguably the biggest complication surrounding Digi-Key’s expansion: the lack of housing around its headquarters.