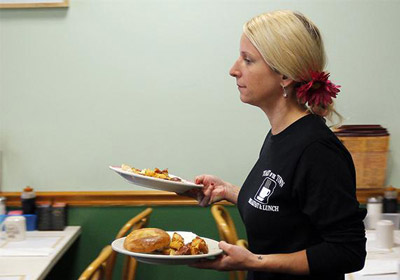 Despite Signs Of Recovery, Minnesota’s Economy Likely To Be No. 1 Issue In 2014

Many young people in their 20s are still struggling to land jobs, and lots of Minnesotans are scraping by on low-paying, part-time jobs.
August 25, 2013

Minnesotans are looking forward to the State Fair and loading up on back-to-school supplies, and life appears great as people enjoy the final weeks of summer weather.

But beyond the bucolic summer lake scenes, Minnesota politicians and their activist supporters are starting to frame their campaign narratives for the 2014 election.

Candidates of all political stripes will need to address the economic insecurity of voters, which exists in Minnesota even though the unemployment rate here is lower than the national average.

That insecurity stems from a rapidly changing economy and a lack of faith in government leaders. Gallup reported this week that a majority of Americans still have negative views about the direction of the U.S. economy and the approval rating for Congress remains extremely low.

Many middle-class Minnesotans, like other Americans, know they'd be in trouble if they suddenly lost their jobs or developed a serious health problem. Many young people in their 20s are still struggling to land jobs, and lots of Minnesotans are scraping by on low-paying, part-time jobs.

Voters will be zeroing in on what politicians plan to do to bolster the supply of middle-class jobs. Will their actions help companies generate more business that allows them to do more hiring? Do they want to alter federal and state tax policies that could lead to business growth and job increases? Do they want to take steps to make education more affordable, so people are qualified for the jobs that exist in the marketplace? Are there regulatory burdens on business that candidates want to eliminate or compliance processes they want to streamline?

All of these questions are relevant for corporate executives, small business owners and workers because Minnesota is competing for jobs and business activities in a global marketplace.

A person or family's financial standing can quickly deteriorate when the breadwinner loses a good job and takes a lower-paying position to generate some income. In 2013, families also are worried about paying high college costs and saving and investing enough money for retirement.

On Wednesday, there was evidence that middle-income and upper-income shoppers are being more cautious in spending on retail goods. For the quarter that ended August 3, Macy's reported an 0.8 percent decline in same store sales. The retailer lowered its earnings forecast for the year.

An Associated Press report provided the following explanation of Macy's weak performance:  “While jobs are easier to get and the turnaround in the housing market is showing promise, the improvements haven't been enough to get most Americans to spend more. Most are juggling tepid wage gains with higher costs of living. On top of that, Americans are still trying to digest higher payroll taxes that went into effect January 1.”

St. Paul Mayor Chris Coleman on Wednesday demonstrated that he's aware there are limits on what people can afford for taxes. In his budget recommendations, the mayor decided to avoid a property tax increase.

Plenty of Minnesotans are worried about future tax burdens as well as their earning potential in a changing economy.

On a WCCO-AM program Sunday, a constituent asked U.S. Senator Al Franken to address the federal debt because the caller said he was worried about the huge amount of money that the U.S. government borrows.

Franken responded by saying the U.S. economy needs to grow to generate more revenue to reduce the debt. From his perspective, the Democratic senator said the federal government can support private-sector expansion by investing in education, infrastructure and research and development.

State Senator Julianne Ortman is the latest Republican to announce a bid to challenge Franken, but the party won't settle on a candidate until the middle of next year. If the Republican candidate hopes to run a closely-contested race with Franken, he or she will need to speak frankly about the economic insecurity that many Minnesotans feel.

Both parties need to support policies that create a climate for business expansion and effective K-12 and higher education systems.

In virtually every election cycle in Minnesota, there are surprises in the outcome of statewide races or control of the Legislature.

In a swing state that has elected Democratic, Republican and Independence party governors since 1998, Minnesota voters have not plotted a steady partisan course. But in the aftermath of the Great Recession, voters can be counted on to carefully assess whether candidates' policies would be good or bad for the state's economy.