Recent college graduates can sleep a little better knowing that their salaries have not only hit an all-time high, but that the average grad salary in the Twin Cities is 6 percent higher than the national average, says a Korn Ferry analysis released in May. And it gets better: “Higher earnings tend to stay with grads during their entire careers,” says Alan Benson, an assistant professor at the University of Minnesota Carlson School of Management.

One explanation for the higher-than-average salary is that the Twin Cities has a diverse industry mix, which has helped create strong earnings growth and low unemployment rates, plus a number of large corporate headquarters, says Benson, who adds that the Twin Cities “is one of the top 10 metro areas for residents with bachelor’s degrees.”

“The need for STEM talent has also gone through the roof,” says Troy Steece, project manager at Korn Ferry Futurestep. “And the race to attract the best talent is driving up salaries.” Of the 25 jobs represented in the snapshot, the four highest-paying jobs in the Twin Cities as well as nationally were STEM careers. The highest-paying position was software developer, with an average base salary in the Twin Cities of nearly $70,000, followed by engineer ($67,259), actuary ($63,179) and scientist/researcher ($62, 711).

“The demand for college [grads] is increasing because companies are realizing this is their new [customer] demographic,” says Steece. “Companies want to target younger consumers because they will be around longer. And who knows how to target young consumers? Younger generations.” —Kate LeRette 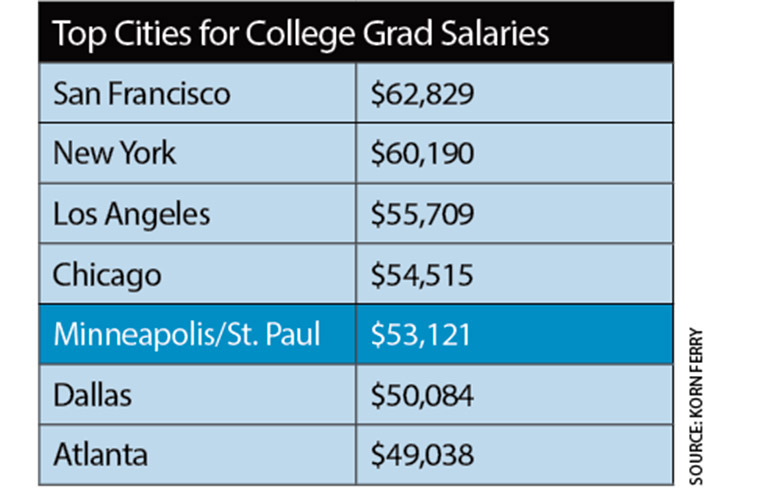