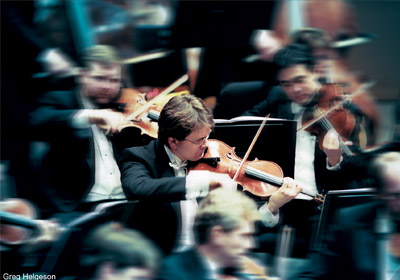 The group Save Our Symphony is urging the city to end its lease with Minnesota Orchestra management; orchestra leaders, however, say they provided sufficient financial information and are in compliance with the lease’s terms.
January 12, 2014

A grassroots advocacy group backing the locked-out Minnesota Orchestra musicians is contending that orchestra management is in default of its lease for Orchestra Hall—and the group is urging city leaders to terminate the agreement.

The Minnesota Orchestral Association (MOA), which serves as the orchestra's management organization, operates Orchestra Hall, which recently underwent a $52 million renovation. Under the terms of its lease, the organization is required to show how the facility is being used to promote the arts in Minneapolis.

In early December, the MOA filed a report with the city of Minneapolis. In its report, the MOA said it is in compliance with the terms of the lease with the city, which owns Orchestra Hall and facilitated $14 million in state bonding for the facility. After the MOA filed its report, the Star Tribune indicated that it would be difficult for the city to take the hall back from the MOA.

Still, grassroots organization Save Our Symphony Minnesota (SOS) sent a letter this week to city leaders, contending that MOA is in default and requesting that the lease be terminated.

The letter was addressed to Minneapolis Community Planning & Economic Development (CPED) Executive Director Jeremy Hanson Willis, and it was also sent to City Attorney Susan Segal and Betsy Hodges, who was sworn in Thursday as Minneapolis’ new mayor.

A city spokesperson told Twin Cities Business on Thursday afternoon that he was unaware of any letter from the SOS. (The SOS said, however, that its letter was sent Tuesday, and it was emailed as well.)

The spokesman said that the City of Minneapolis continues to review the report that MOA submitted last month, adding that the lease agreement gives the city 45 days after receiving the document to determine whether MOA is in compliance with the lease. “We expect to have a determination within that 45-days window,” he said.

A spokesperson for orchestra management, meanwhile, said in a Thursday evening email to Twin Cities Business that the SOS letter “fails to consider additional information and financial detail” that orchestra management provided to the city and state leading up to the signing of the lease in 2012. “The orchestra fully disclosed the financial position of the organization for the city and state, including the need to reduce endowment draws and restructure salary and benefits expense,” the MOA said.

In its letter, the SOS cites the lease, saying that the MOA would be in default if all information it previously submitted to the State of Minnesota was not “true, complete, and correct . . . in all material respects.”

The SOS then cites a December 10 letter in which 10 state legislators reportedly accused MOA leaders of mismanagement, saying they “manipulated financial results in a deliberate deception of the public, first to gain public funding for Orchestra Hall and then to justify locking out the musicians for well over a year.”

The MOA has reportedly already responded to that accusation, saying that the Legislative Auditor already discredited those allegations. But the SOS claims that the auditor actually “substantiated” such accusations.

In other words, the SOS claims that the MOA failed to provide complete financial information—in part because leaders allegedly did not tell the state about concerns regarding the organization’s financial condition—and should thus be found in default of its lease. The letter also suggests that donations made to the orchestra have formed a charitable trust, with MOA as the trustee and Orchestra Hall being an asset of that trust.

“With the termination of the lease, the City of Minneapolis will become the successor trustee with the responsibility to use Orchestra Hall for the purpose intended by the donors,” the SOS wrote in its letter.

In its statement to Twin Cities Business, the MOA refuted the SOS' claims: “Our attorneys advise that the charitable trust cases cited in the letter don’t affect the terms of the MOA lease. The lease expressly provides for reimbursement of a portion of the building costs paid for by MOA if the lease terminates under certain circumstances. MOA would comply with all donor restrictions applicable to any reimbursed funds.”

Read the full SOS document—which also includes a copy of the legislators’ letter to MOA and the report from the Office of the Legislative Auditor—here.

Since orchestra management locked out musicians in late 2012, the two sides have been at an impasse regarding labor contracts for players, as the organization attempts to reduce its budget deficit.

In October, on the one-year anniversary of the musician lockout, Osmo VÃ¤nskÃ¤ resigned from his role as music director of the Minnesota Orchestra.

Last month, the MOA released its annual report, which showed a $1.1 million operating loss, compared to the prior year’s $6 million deficit.

And in mid-December, the orchestra’s musicians said they would go it alone, with plans to put on at least 10 performances in a self-produced winter/spring season.