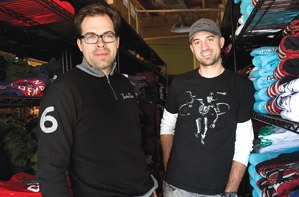 Long winters notwithstanding, the Twin Cities have become one of the most bike-centric metro areas in the U.S. And that’s helping put fashion-forward bicycle apparel line Twin Six on the bike route map.

Brent Gale envisioned the Minneapolis apparel design firm in 2002 while working on a freelance project for another cycling apparel company. “I was doing research on cycling jersey graphics and realized there was nothing out there that I would want to pay full price for, much less even wear,” he says.

Inspired to start his own apparel company, Gale recruited Ryan Carlson, with whom he’d worked at Minneapolis-based Sussner Design. The pair brainstormed ideas during long bike rides, then introduced the first fruits of their collaboration at the 2002 InterBike trade show. Six months later, sales were sufficiently promising for Gale to quit his day job in product design and development at Target, and for Carlson to leave his gig at advertising agency Colle & McVoy.

“We consider ourselves a lifestyle line,” Gale says. “And lifestyle is driven by graphics.” Which is to say that Twin Six positions itself neither as a high-performance brand nor an entry-level one: “We’re right there in the middle, price wise and functionality wise.”

The Twin Six line attracts a range of riders, from weekend warriors to intermediate-to-advanced racers, and the jerseys’ fit reflects that range. Traditionally, “Euro cut” jerseys fit tighter to the body and are more geared toward racers, while “American cut” or “club cut” jerseys are looser and intended for recreational cyclists.

Twin Six’s jerseys and T-shirts—what Gale calls the company’s “bread and butter”—were picked up in its first year by outdoor-gear retailer REI. “Without them, we wouldn’t have had the numbers that we needed to place a preorder without putting ourselves in a little bit of risk,” Gale says. Twin Six jerseys now are sold at 108 REI stores.

“What really attracted me was that their graphics were original and a little nontraditional from what else you would see as a typical bike line,” REI buyer Cynde Norr says.

Online orders accounted for 50 percent of Twin Six’s sales in 2010; some 250 bike shops in a dozen countries also carry its products. Its estimated 2010 revenues were $1.3 million. The T-shirts and jerseys are manufactured at “sweat-free” shops in California. Twin Six also sells its own brand of sweatshirts, sweaters, hats, and socks.

Twin Six’s target audience, Gale says, is cyclists who “care about the way they look off the bike, and they’re relieved that somebody’s doing something that’s a little bit more fashion forward than everybody else on the bike.”

In addition to their apparel line, Gale and Carlson are currently designing the graphics for the Speedy Devil frame being developed by Minneapolis-based Handsome Cycles, and they’re collaborating with Raleigh on a bike for 2012.