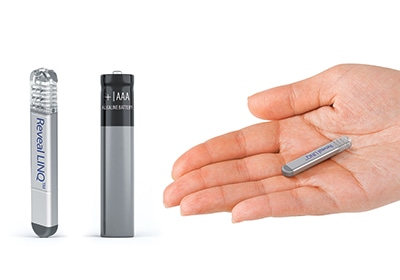 Could Medtronic’s Latest Monitoring Implant Be A Lifestyle Option?

The Reveal LINQ's smaller size is being touted as a breakthrough.
October 01, 2014

A new Medtronic cardiac monitoring device boasts such advances in miniaturization and simplicity of implantation that the company thinks it one day may be used by healthy people as often as by sick ones.

The Reveal LINQ was created to determine whether patients’ recurrent fainting problems were caused by a cardiac arrhythmia. The Reveal LINQ allows constant behind-the-scenes monitoring of heart palpitations 24/7 for three years. But implantable cardiac monitors are not new.

The breakthrough here, say company officials, is the product’s miniaturized size, more than 80 percent smaller than other insertable monitors—smaller than a AAA battery and requiring an incision of less than 1 centimeter to implant. Doctors don’t need the level of specialization that was previously required to implant the device, says Medtronic senior program director for diagnostics and monitoring Mark Phelps.

“The simplification of the procedure was an important part of the system design,” Phelps says. “It’s going to cause a great reduction in costs, and will allow the procedure to take place more easily in developing countries.”

When the device was initially proposed, William Katsiyiannis, clinical director of the Minneapolis Heart Institute’s heart rhythm management program, thought it interesting but not necessarily groundbreaking. That is, until he began describing to patients the Reveal LINQ’s diminutive size as closer to a paperclip than a flash drive—and touting the fact that it involves less scarring and no need for stitches.

“From a market penetrance perspective, it really is [groundbreaking],” says Katsiyiannis, who estimates he has implanted devices in up to 10 patients within the past six months. Although Medtronic is primarily focused on the implant’s role in diagnosing cardiac arrhythmias, Phelps thinks current capabilities are just the tip of the iceberg.

“I think the natural path for future implantable monitors will be in the health preservation and lifestyle realm,” Phelps says. “Our next generation of implants could connect directly with smartphones and take advantage of the mobility infrastructure that’s out there.”

Phelps envisions a future where the devices are so easy to implant that they won’t just be used for disease management but by young, healthy people to monitor how lifestyle affects their health, similar to wearables used today, but on a much more in-depth and powerful level.

While Katsiyiannis agrees there’s a market for healthy patients, he cited a couple of hurdles. The device’s three-year battery life should be greater. Too, “as smartphone technology changes, you could get into a problem where the device is under your skin but is passed up technology-wise.”